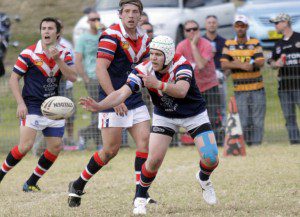 A field goal helped the Camden Rams win the match.

Camden have won their Group 6 Qualifying Semi Final against Picton in the most dramatic of circumstances on Sunday afternoon at Kirkham Park.

A strong crowd turned up to see the first match of the double header, with both first grade semi finals being played at the one venue, and they weren’t disappointed.

Nick Crouch opened the scoring for Camden after 13 minutes, before heading off with a right leg injury minutes later.

Alex Canham added another try 12 minutes before halftime, following some nice leadup work on the Camden right. The Rams lead 8-0, but wouldn’t have been confident with the lead. Picton managed a try on the stroke of halftime, but trailled 8-4 at the break.

Picton’s resurgence continued after the break, with Donny Thompson scoring shortly after the resumption giving the Magpies a 10-8 lead.

This didn’t last long, with Camden halfback Chris Browne running 60 metres with an intercept to score under the posts and restore Camden’s lead at 14-10.

Rory Vale crossed shortly after to give Picton a 16-14 lead, but he will thanks Blake Matthews for the setup of the play.

Mataika Vatuvei gave Picton a six point lead with 13 minutes left, but all present knew this wouldn’t be safe for the Magpies.

Camden forward Ben Weir scored with only seconds remaining on the clock, levelling the scores at 20-20, and sending the game into extra time.

Rams halfback Browne missed a relatively easy penalty goal attempt 3 minutes into the extra period, which would have sealed victory for the home side.

Browne restored faith for the home fans, when he kicked a 40 metre field goal early in the second period of play, on a very acute angle, to give Camden a 21-20 victory, and meeting with Mittagong next weekend.

Camden coach Mitch Newton was relieved with the victory, and said he was happy with the aspects where the Rams stayed with a class outfit like Picton.

Newton said he was surprised when Browne missed the penalty attempt, as he’s been kicking well this season, but was relieved when the field goal went over.

Picton coach Gary Dowse says his side made some frustrating errors during the game, but ‘the other guys had a lot more chances…read into that what you will’

Camden will now meet Mittagong in the major semi final, while Picton meets Narellan, who defeated Appin in the elimination semi final.

Appin had their chances, and led midway through the second half, but the experience of Narellan shone in the end, giving them a solid win.

Appin winger Glynn Bester, who scored a treble on the day, opened the scoring after six minutes to give the Dogs an early lead.

Narellan levelled the scores through Cameron Graham, before Jay O’Mullane quickly restored the lead for the Dogs, with a nice effort from close range.

Narellan suffered a serious setback when fullback Ben Baker suffered a shoulder injury just before halftime, and wasn’t able to return. Baker was later taken to hospital for treatment on a dislocated shoulder.

The Dogs held their lead until halftime, before Bester’s third try shortly after the break gave Appin a 10 point lead early in the second half.

Narellan’s comeback began through Warra Hanita-Paki, before Jamie Milo scored from some nice play down the Jets’ left hand side.

Stuart Flanagan gave Appin back the lead through a solo try, but the Dogs lead was only four points, and never secure for their supporters.

Appin prop Danny Gallagher was sin binned in the 63rd minute, but the Jets’ took advantage of the extra man on the field.

Rhys Lenarduzzi scored a quick double, both while Appin had 12 players on the field, and gave Narellan a six point lead with six minutes remaining.

A try on the final siren to Guy Thompson gave Narellan a solid win, but coach Daryn Fallshaw has plenty to deal with before next week’s semi final against Picton.

Fallshaw was pleased with the win after the game, but admitted his side is ‘banged up’ and he’s lost Baker for an extended period of time.

Fallshaw said he knew the game ‘wouldn’t be pretty’ and his side had a tough assignment ahead of them on Sunday.

He said Rocky Trimarchi will return for next week’s match with Picton, and said the Magpies ‘played in a high quality game’ against Camden earlier on.

Appin coach Dane Wooden wasn’t available for comment, but would be disappointed with the result from his side on Sunday.

Results from Week 1 of the Group Six Rugby League Finals played on the weekend:

Final match for Glavas, the first for Katie
Defences wobbly as try fest ends in 42-all draw