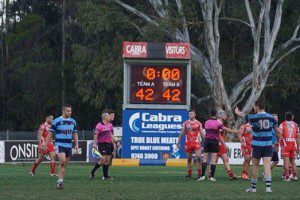 Incredible scoreline: The ground scoreboard tells the story of the match between the Eagles and Cabra. Picture by Brett Aitken

A second half try fest by the East Campbelltown Eagles and Cabramatta Blues ended in an incredible 42-all draw on Sunday. The round 21 Sydney Shield had everything, with the lead changing several times during the 80 minutes.

The Eagles took on seventh place Cabramatta Blues, who were fighting for a place in the top eight while Eagles wanted to stay in the top four.

The Eagles came out firing and scored two early tries to Sam Hoare and Craig Shipley, but with the Eagles first choice goal kicker Stephen Harding still on the side lines injured, the kicking duties were performed by Wayde Dunley, who missed the first two attempts at conversions, so the Eagles were only leading 8-0.

Eagles then blew another two good scoring opportunities before Cabramatta hit back with a lucky bounce to score under the posts to make the score 8-6.

Soon after a  Cabramatta centre was sent from the field for a head butt, and the Eagles used the extra man to score out wide to Sama Sauvao. Chris Standing stood up to the challenge to get the conversion.

Cabra again hit back at the 30 minute mark and reduced the deficit to two points, trailing 14-12.

Wayde Dunley then scored next for the Eagles, stepping a couple of defenders and putting the ball down near the uprights. Standing’s conversion was successful and the Eagles were leading 20-12, but Cabramatta hit back with a converted try right on half time to go into the sheds just two behind at 20-18.

The second half became a real try fest with the defence from both teams playing second fiddle to the attack.

Cabra scored first with a converted try to hit the lead for the first time 24-20, but the Eagles didn’t take long to get the lead back when bustling winger Giovanni Vatuvai scored in the corner and Standing’s conversion was a beauty to get the Eagles back at 26-24.

Eagles looked like they would go on with the game when Dunley scored his second and Standing again converted, but that wasn’t the case as poor discipline for the Eagles resulted in a number of penalties giving Cabra good field position.

The Blues made the most of it, running in three converted tries to jump to a 42-32 lead with 10 minutes to go.

But it was far from over.

The Eagles jumped into gear with tries to Lamoni Kamuta and Craig Shipley. Standing potted one conversion to  level the score at 42-all.

Eagles coach Gary Potts said after the match: “Our defence was well below par today, and it’s not good going into the semi-finals, with a display like that, we were lucky with the draw today as Cabramatta was way the better team and more hungrier for the points.”

Best for the Eagles where Michael Bradstock, Jimmy Laulilii and Chris Standing.