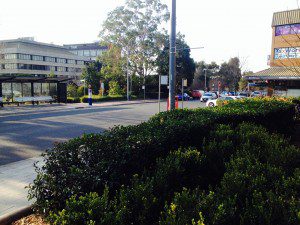 Campbelltown Council’s administration centre, where its meetings are held, on the third floor.

On Tuesday night, the former Campbelltown mayor Anoulack Chanthivong  came back from a year’s leave of absence with a bang. His call for a report on how much it had cost to hold the previous night’s extraordinary meeting to elect a mayor set the scene for one of the more fiery meetings in recent years. Not that Councillor Chanthivong was finished: he also took aim at transparency in council decision making, and more specifically, about the plan to spend $700,000 in ratepayers’ money on an artificial turf at Lynwood Park, where the Macarthur Rams football club play their matches. I don’t think it was meant to be, but some councilors took his attack personally, with, for example, Councillor Fred Borg saying he founded it “disgusting’’ that anyone would query the cost of mayoral functions such as civic receptions, which was brought up by Councillor Paul Hawker during the “debate’’. The meeting meandered in that frustrating vein for the next four and a half hours before it was mercifully over. It has to be said though that throughout such a messy meeting, the new mayor, Paul Lake, managed to keep his composure. Let’s hope that this was a one off and normal transmission will resume at the October meeting.

They will need to in any case, especially when it comes to the future of the Wests Tigers. Councillors were told by general manager Paul Tosi that a hoped for meeting had been delayed because it had taken a long time for the NRL to name the independent members of the Tigers board, who will effectively run the club. But it’s interesting that Liverpool has not had the same problem as it pushes an aggressive campaign to have Sydney’s third major stadium built there and also to sign up clubs like the Tigers and the Bulldogs to play Matches there.

Speaking of the Wests Tigers, my mail is that former St Greg’s boy and Magpies halfback Jason Taylor will get the nod to replace Mick Potter, whose contract was not extended by the new board and he is now looking for a new gig somewhere else. Taylor, who just missed out on the Tigers job two years ago, is in my opinion the smartest young coach in the game and the Tigers would be silly to let him slip through their fingers again. Taylor was coaching South Sydney to glory when a mad Monday indiscretion cost him his job and he’s been paying the price ever since. Time has come to say he’s done the time and to be given a second chance.

The deputy mayor of Liverpool for the past two years, Mazhar Hadid, is about to give up the role to concentrate on becoming the next state member for Liverpool. It seems that Cr Hadid pretty much performed his deputy mayoral duties as a full time job because he wanted to do so much for Liverpool and also to help out the mayor, Ned Mannoun. But now that the Liberal Party has preselected him to take on Labor’s veteran MP Paul Lynch – first elected in 1994 – at the next state election in March 2015, Cr Hadid has made the wise decision to concentrate on his campaign.

The South West Voice is getting a steady stream of compliments about our little news website. But none was as interesting as the woman who called in to say how much she liked the site. The Denham Court resident was really interested in the Badgerys Creek airport issue and Liverpool’s task force, but also wanted to know the who, what and how of the Voice, and we were happy to oblige. As we always say, we love feedback, whatever shape it comes in.

More than 40 years experience in the news media, most of them as editor of local newspapers across the Sydney metro area, but a few years working as a sub-editor with the metros. Lots of awards, both as a reporter and editor, but says he values just as much Community Service Awards from Campbelltown City Council in 2004 and 2016. Took a voluntary redundancy in 2014 from Fairfax Community Newspapers after 21 years there. Loves the digital world, because ''there's no question it's the future''. Eric promises his hard hitting but fair approach won't change when he reports the news via cyber space.
View all posts by Eric Kontos
Why south west is great
The big boom has arrived