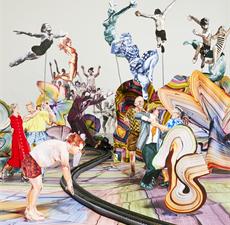 Both will be open to the public for free until January 25 next year.

While Different Strokes explores the relationship between drawing and sculpture, Mind the Gap is one of Casula Powerhouse Arts Centre’s most ambitious projects, inviting five contemporary artists to work with the Casula model train group.

The artists and the model train club have collaborated to build artworks that model trains will travel through.

The artists taking part have each coincidentally proposed fantastical worlds that are far removed from traditional model train scenery including an internal landscape of the body, a speculative future Utopia, a Baroque inspired dreamscape, a ghost train and a love train.

This project merges two disparate communities and their creative worlds.

One of the very few parameters for this project is that a working model train will travel through the work, allowing artists and rail fans to share ideas and skills with spectacular and innovative results.

On the other hand, what you will discover in the Different Strokes exhibition is an examination of the relationship between drawing and sculpture.

On the surface, the immediate and intimate nature of drawing seems to have no relationship with sculpture, which operates by occupying the viewer’s physical space.

Drawing often plays the role of the introvert and sculpture the extrovert.

But this group of contemporary artists in Different Strokes tread the fine line between the two disciplines.

They include Koji Ryui, with HAVE A NICE DAY (Bachelors) (detail), 2013 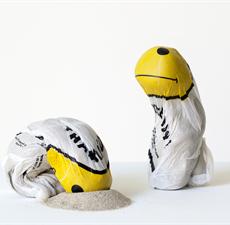 More than 40 years experience in the news media, most of them as editor of local newspapers across the Sydney metro area, but a few years working as a sub-editor with the metros. Lots of awards, both as a reporter and editor, but says he values just as much Community Service Awards from Campbelltown City Council in 2004 and 2016. Took a voluntary redundancy in 2014 from Fairfax Community Newspapers after 21 years there. Loves the digital world, because ''there's no question it's the future''. Eric promises his hard hitting but fair approach won't change when he reports the news via cyber space.
View all posts by Eric Kontos
Tracks highlight of film festival at Casula Powerhouse
Minor premiers West Sydney Pirates can party like it’s 1999