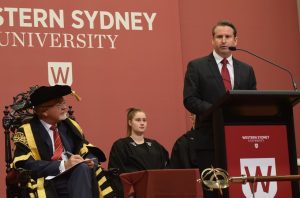 Education is the greatest equaliser in the pursuit of prosperity and the foundation of a fair and just society, MP GREG WARREN told graduates when he delivered the occasional address at Western Sydney University’s Business School graduation. This is an edited version of his speech:

I grew up in central west NSW, left school in Year 10, and enlisted in the Australian Regular Army where I served as rifleman, paratrooper, transport soldier and Non Commissioned Officer.

While it may not seem like it on the surface, my time as a soldier combined with my post military industrial work was undoubtedly the motivation and beginning of my academic education.

Upon discharge almost a decade later, my academic interest grew and I embarked on further studies in business and commerce, focusing on corporate governance and social economics; ultimately achieving my Masters of Business Administration as an Australian Institute of Business Alumnus.

This provided me with the vehicle to be a senior manager, director and leader in a number of corporate fields and not for profit NGOs prior to my election to the NSW parliament.

As the influence of business in all aspects of modern society continues to grow, business practices are becoming more innovative; but are also more intently scrutinised for their impact on society as the fundamentals of globalisation become increasingly prevalent.

In the careers you are about to embark, you will no doubt confront the usual challenges that business managers, administrators and captains of industry alike have all historically confronted.

Graduands, you enter a new culture of modern business that increasingly commands focus beyond financial outcomes to also include environmental and social outcomes.

More than 40 years experience in the news media, most of them as editor of local newspapers across the Sydney metro area, but a few years working as a sub-editor with the metros. Lots of awards, both as a reporter and editor, but says he values just as much Community Service Awards from Campbelltown City Council in 2004 and 2016. Took a voluntary redundancy in 2014 from Fairfax Community Newspapers after 21 years there. Loves the digital world, because ''there's no question it's the future''. Eric promises his hard hitting but fair approach won't change when he reports the news via cyber space.
View all posts by Eric Kontos
Ancient Cumberland Plain giants will live on for hundreds of years
Twilight street parade to add spark to Fisher’s Ghost Festival