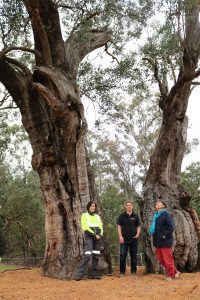 Giants set to live for a few more hundreds of years: Land services officer Peter Ridgeway, Julie Sheppard of REPS and Amanda Blunt from South32 Illawarra Coal with one of the blue box eucalypts at Menangle.

Some of South West Sydney’s oldest native woodland – trees more than 500 years old – has been restored.

Thanks to a collaborative campaign focused on protecting the Cumberland Plain these giants at Menangle will live on for a few more hundreds of years.

Some of them are almost two metres in width.

The Greater Sydney Local Land Services project, in partnership with South32 Illawarra coal and the Razorback Environment Protection Society (REPS), has seen extensive restoration works undertaken on a rural Menangle property in a bid to save a patch of Blue Box eucalypts estimated to be more than 500 years old.

Now they want to save more and have called on property owners to jump on the bandwagon.

Senior Land Services officer Peter Ridgeway, who has worked extensively to preserve the Cumberland Plain Woodland for the past eight years, says the Blue Box are among the oldest trees remaining in the area.

“With less than eight percent of the original woodland remaining, the Cumberland Plain is so important to protect,’’ he said.

“Large remnant trees like the ones we discovered on this property provide natural hollows to shelter native animals like owls, parrots, possums and bats.’’

Mr Ridgeway said the works funded included fencing trees to stop ringbarking by horses and other measures to reverse the impacts of past damage to the trees. “This included loosening the soil with compressed air to reverse the compaction caused by years of stock and mulching and ultimately restore soil carbon and improve soil health.

“This work will extend the life of these trees by hundreds of years,” he said.

REPS secretary/convenor Julie Sheppard said the project was crucial to protecting the natural values in the Menangle region.

“This is an extremely significant patch of native vegetation and it is fantastic to see landholders, commercial enterprise, the local community and government working together to ensure it is protected and preserved,” she said.

“The quality of the work has been outstanding.

“We are already seeing trees that were on the brink of dying flowering again and setting the scene for a new generation.”

Mr Ridgeway said the trees had diameters from 1.5 to 1.92 metres.

“This by far surpasses the width of any other trees in the remaining patches of Cumberland Plain,” he said.

Mr Ridgeway encouraged other landholders to contact Greater Sydney Local Land Services for advice on managing native vegetation in their own backyard.

“If you are unsure of what vegetation you have on your property we have a team of experts who can provide advice and assistance in both native vegetation and weed management,” he said. 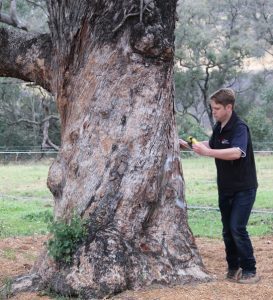 Some of the trees are almost two metres in width: Peter Ridgeway measures the trunk of one of them.

More than 40 years experience in the news media, most of them as editor of local newspapers across the Sydney metro area, but a few years working as a sub-editor with the metros. Lots of awards, both as a reporter and editor, but says he values just as much Community Service Awards from Campbelltown City Council in 2004 and 2016. Took a voluntary redundancy in 2014 from Fairfax Community Newspapers after 21 years there. Loves the digital world, because ''there's no question it's the future''. Eric promises his hard hitting but fair approach won't change when he reports the news via cyber space.
View all posts by Eric Kontos
Parenting orders: what to do if there’s a breach
Everyone should have the opportunity to learn