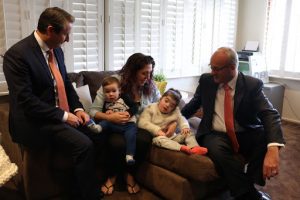 Ambarvale resident Belinda O’Connell is one of them.

Ms O’Connell says she will struggle to pay for the increasing cost of electricity.

Mr Foley announced that if elected Labor would make the cost of electricity affordable for families like hers.

This is in contrast to expected electricity price increases from July 1 of around 17 percent. This would translate to annual average increases of $320 for households and $920 for small businesses.

“From July 1, people like Belinda are facing increases of more than $320 a year,’’ said Mr Foley.

“Families and small businesses are facing record power bills because this government did everything it could to drive the price up ahead of privatisation.

“This government even went to court to overturn the independent regulator’s price cuts.

“Labor will not stand by and let family budgets be crushed and businesses wrecked by power price hikes.”

Mr Foley said Labor has a comprehensive plan to make electricity affordable and will re-regulate the electricity market to help households and businesses struggling to keep up with the rising cost of living under the Berejiklian Government.

“A Foley Labor Government will re-regulate the electricity companies to ensure that consumers are treated fairly,’’ he said.

“People in my electorate tell me how hard cost of living pressures are,’’ he said.

“Some are afraid they simply won’t be able to afford such price hikes.

“Campbelltown residents will be wondering why, if the government has got so much money in the bank, life under the Liberal National Government is getting harder not easier.’’

More than 40 years experience in the news media, most of them as editor of local newspapers across the Sydney metro area, but a few years working as a sub-editor with the metros. Lots of awards, both as a reporter and editor, but says he values just as much Community Service Awards from Campbelltown City Council in 2004 and 2016. Took a voluntary redundancy in 2014 from Fairfax Community Newspapers after 21 years there. Loves the digital world, because ''there's no question it's the future''. Eric promises his hard hitting but fair approach won't change when he reports the news via cyber space.
View all posts by Eric Kontos
Former NSW Premier takes reins at Ghosts cricket club
This is the golden age of travel – and we are national champions