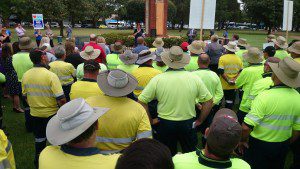 Liverpool Council chief executive officer Carl Wulff  says council is not planning to outsource any of its services.

Indeed, the council CEO says, any changes would more correctly be called insourcing than outsourcing.

Mr Wulff was responding to a series of questions put to him by the South West Voice following union claims of planned outsourcing ahead of a staff stopwork meeting this morning  at Bigge Park.

Here are the questions and Mr Wulff’s answers:

Is Council in fact considering outsourcing these services?

Will Council be voting on this matter on March 23?

Council adopted a position of potentially partnering with a company called Propel at its meeting on 4 February 2015, at that meeting it was indicated that Council would receive a further report by the end of April 2015 for Council to consider its position.

Has there been consultation with staff, how much and how long?

The following consultation has been undertaken with staff and the union:

Meeting with USU representative and CEO to discuss Strategic Services Partnership at 2.30pm. Following this meeting, follow-up correspondence was provided to the USU confirming all discussions that took place with the Union at this meeting dated 12 February 2015, below is an extract from that correspondence;

“I take this opportunity to outline the intention of Council in pursuing a Strategic Services Partnership with an external provider, and at this stage this provider would appear to be Propel Pty Ltd.

In the current environment and having consideration of the requirements of Fit for the Future, Council is of the view that it needs to demonstrate that it is effective in embracing innovative opportunities to improve service delivery to the residents of Liverpool. The proposed Strategic Service Partnership will be focused on improving the quality of information and service provided to the Liverpool community. This would also include improved efficiency and timeframes for services that would be delivered within the partnership. The partnership is not intended nor will it seek to undermine or diminish the standards of employment of staff of Liverpool City Council. Staff working within the partnership framework will remain employees of Liverpool City Council and these employees will be entitled to all award conditions under the Local Government Award. Again, I would like to reinforce that the focus of this partnership is on improving service, not on diminishing staff conditions.

Services Partnership process. During the next phase of the process Council will be identifying staff that will be engaged in the partnership model and accordingly, it is my intention to meet with each and every one of those staff members in small groups over the coming weeks to outline to them what the partnership means and what opportunities will be provided to them as members of the staff complement working within the partnership model.

Meeting with staff and CEO at 1.00pm & 3.00pm for 1 hour with questions and answers following meeting.

The meeting with initiated by the CEO’s office and sent to Director’s who then discussed the invitation with the staff to be invited. Although the invitation was sent to those identified in the partnership, other staff that were not identified in the Partnership also attended the meeting. At the completion of the meeting staff were advised that they could contact the CEO directly if they did not feel comfortable addressing questions to him at this meeting. The meeting was also attended by the USU representative Ms Sandi Morthen.

Meeting with staff and CEO at 1.00pm with questions and answers following.

The meeting with initiated by the CEO’s office and sent to Director’s who discussed the invitation with staff to be invited. Although the invitation was sent to those identified in the partnership, other staff that were not identified in the Partnership also attend the meeting. At the completion of the meeting staff were advised that they could contact the CEO directly if they did not feel comfortable addressing questions to him at this meeting. The meeting was also attended by the USU representative Ms Sandi Morthen.

Meeting with Propel and whole of LCC management team at 1.00pm. Meeting initiated by the CEO’s Office and attended by whole of EMT and Management team.

Meeting with staff and propel @ 10 and 10.30am and one on one meetings with Propel and staff at the request of various staff members. Meetings initiated by Business Improvement, which allowed staff to attend a meeting where Propel outlined the current services and processes provided by the partnership at Ipswich City Council. Staff had the opportunity to ask questions at the completion of the meeting. The meeting was also attended by the USU representative Ms Sandi Morthen.

Will there be job losses if this outsourcing plan goes ahead and how many?

Again, I reiterate this is not an outsourcing process and it is not considered that there will be any job losses in moving down the path of the SSP.

More than 40 years experience in the news media, most of them as editor of local newspapers across the Sydney metro area, but a few years working as a sub-editor with the metros. Lots of awards, both as a reporter and editor, but says he values just as much Community Service Awards from Campbelltown City Council in 2004 and 2016. Took a voluntary redundancy in 2014 from Fairfax Community Newspapers after 21 years there. Loves the digital world, because ''there's no question it's the future''. Eric promises his hard hitting but fair approach won't change when he reports the news via cyber space.
View all posts by Eric Kontos
YouTube video help for dental health of pregnant women
Stopwork meeting: 200 Liverpool Council staff attend