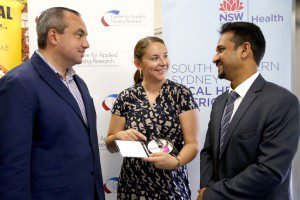 Mr Rowel, project officer Danielle Guyder and Dr Ajesh George at the launch of the video.

Mr Rowell, who is also the State Member for Wollondilly, said the video was funded by a $32,904 grant from NSW Kids and Families and is an initiative of the South West Sydney Local Health District based midwifery initiated oral health dental service.

“The 10 minute video Keep Smiling While You are Pregnant makes women aware of the importance of good dental health during pregnancy and is available on YouTube,” Mr Rowell said.

“Research has shown that more emphasis needs to be placed on oral health during the prenatal period, with many pregnant women not receiving information on the importance of oral health care during pregnancy.

“Poor oral health in pregnant women can increase the risk of early dental decay in infants and may contribute to lower birth weight and even premature births,” Dr George said.

“Women who have untreated dental decay can nearly double the chance that their children will have early dental decay after birth.

“Women tend to avoid dental care during pregnancy because they aren’t aware that it’s absolutely safe to have dental treatment done while you are pregnant. In fact it is much better to have any infections removed as soon as possible, rather than waiting until after their baby is born.”

For more information on maintaining sound oral health while pregnant, the video can be viewed online via http://youtu.be/H5R24RjZiPE

More than 40 years experience in the news media, most of them as editor of local newspapers across the Sydney metro area, but a few years working as a sub-editor with the metros. Lots of awards, both as a reporter and editor, but says he values just as much Community Service Awards from Campbelltown City Council in 2004 and 2016. Took a voluntary redundancy in 2014 from Fairfax Community Newspapers after 21 years there. Loves the digital world, because ''there's no question it's the future''. Eric promises his hard hitting but fair approach won't change when he reports the news via cyber space.
View all posts by Eric Kontos
Lawrence back for clash with Benji’s Dragons
Changes more like insourcing, says Liverpool Council CEO