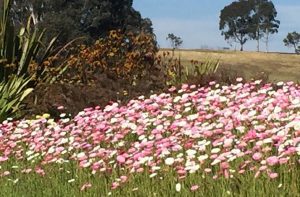 The wild Western Australian paper daisies have flowered early this spring at Australia Botanic Garden at Mount Annan thanks to ideal growing conditions.
More than half a million seeds have been planted producing a vibrant display of pink, white and yellow blooms that will be on display until the middle of October.

The paper daisies are one of the most popular features at the Garden during spring and can be found at Lakeside and in the Connections Garden.

According to garden curator manager John Siemon they are making a dazzling display in colours of pink, yellow and white, thanks to the ideal growing conditions.

“Last year we sowed the seed in April and then we had a huge downpour of rain which washed away sections of our plantings,” he said.

“But this year they were sown in ideal conditions with gentle follow up rain that triggered a uniform germination.

“It’s been the perfect weather.

“The pink colours are particularly vibrant this year which may be due to the cooler weather towards the end of winter.”

Mr Siemon said there had already been a great deal of interest in the flowers from the general public and it was expected to continue for the next four weeks.

Each spring the paper daisies come to life with an abundance of colour, as do more than 200 species of Australian wattle.

Photographers, both professional and amateur will delight at the stunning backdrop these flowers afford in NSW, where they have been cultivated by the garden’s horticultural team so they can be appreciated closer to home.

To see the paper daisies, visit the Australian Botanic Garden from now until mid-October.

Admission is free and the garden is open every day from 8am and until 5pm.

More than 40 years experience in the news media, most of them as editor of local newspapers across the Sydney metro area, but a few years working as a sub-editor with the metros. Lots of awards, both as a reporter and editor, but says he values just as much Community Service Awards from Campbelltown City Council in 2004 and 2016. Took a voluntary redundancy in 2014 from Fairfax Community Newspapers after 21 years there. Loves the digital world, because ''there's no question it's the future''. Eric promises his hard hitting but fair approach won't change when he reports the news via cyber space.
View all posts by Eric Kontos
The write way to talk up endangered species
Parenting orders: what to do if there’s a breach