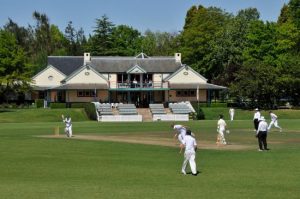 The Ghosts will play their final match before Christmas at Bradman Oval, Bowral this Saturday, when they will host St George in a round 8 limited overs match starting from 10am. They will be hoping young opener Aaron Yabsley will score another century after his 107 last Saturday against Hawkesbury.

Campbelltown Camden Ghosts are ending the year on a positive note after a magnificent 107 from young opener Aaron Yabsley in first grade.

Victory in second grade against Hawkesbury on Saturday was another sign the mighty Ghosts may have turned the corner in the 2016-17 season and results will start to go their way in the new year.

The Ghosts will also gain some inspiration from playing their last match before Christmas at Bradman Oval in Bowral this Saturday.

They will host St George in the round 8 limited overs match, scheduled to start from 10am if you fancy a drive to the Southern Highlands to support the local lads.

The Ghosts will return to Raby 1 for the round nine clash on Saturday, January 7, 2017, when they will host Penrith from 10am.

On Saturday and the final day of the round 7 clash with Hawkesbury at Owen Earle Oval, Ghosts first grade started with the score at 0/18 in their second innings, having conceded first innings points a week earlier.

Once again the Ghosts openers got off to a good start with Mitch Carruthers and Aaron Yabsley putting on 114 for their opening wicket.

But the highlight of the day was a century by young opener Aaron Yabsley, who’s been in good form all season.

Yabsley batted for just over four and a half hours in his 187 ball stay that included 13 fours and one six.

Yabsley’s innings was the backbone for the Ghosts as wickets fell quickly around him until a 48 run partnership with Ash Paddison restored some order.

This brought Jack Preddey to the crease, who went on to score an undefeated 53, an innings that included nine boundaries.

Preddey and Yabsley added 51 before Yabsley was dismissed with the score on 233.

Preddey and Luke Webb were the not out batsmen when the Ghosts declared at 257, a lead of 256.

The Hawks set about chasing the target in the remaining 29 overs of the day, but finished at 1/132.

♦ In second grade at Raby, Hawkesbury started the day at 2/55 in their pursuit of the Ghosts 229.

An early run out by skipper Mitch Hinds and a wicket to Braedyn Evans put the visitors under pressure at 4/65. A small partnership gave the Hawks some hope but a second wicket to Evans and another to Lachlan Inger kept the Hawks at bay at 6/117.

The Ghosts went to claim the last four wickets for 28 runs and victory.

Nathan Baker continued his good form with the ball taking three wickets for the Ghosts.

♦ The Hawks began day two in third grade with a 41 run lead after dismissing the Ghosts last week for 125.

The Hawks continued their assault of the Ghosts bowlers before declaring at 8/252, with an overall lead of 127.

The Ghosts were asked to bat again and were dismissed for 169.

Josh Stewart scored 48, with Brendan Redman 42 and Nick Mortimer 34 also contributing to the Ghosts tally. However, Hawkesbury went on to score the required runs for outright victory.

♦ At Raby 2 in fourth grade, the Ghosts were in pursuit of the visitors’ 214, however could only score 121.

In their second innings, Hawkesbury were 4/67 with Connor Passlow and Jarrod Tripp each taking two wickets.

♦ A magnificent 142 from wicketkeeper Quinn Passlow wasn’t enough to secure the victory for fifth grade who again fell agonisingly close.