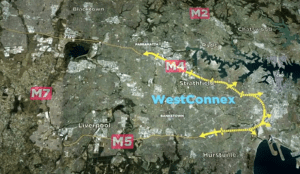 Make no mistake: if you are one of the 200,000 or so western and south western Sydney workers who has to get into the car every morning and drive east to your place of employment, the WestConnex road project is aimed squarely at you.

The 33 kilometre WestConnex tollway will link Sydney’s west with the airport and the Port Botany precinct, and will include the M4 extension and duplication of the M5 East to King Georges Road.

WestConnex was the key recommendation of Infrastructure NSW when it released its report into the state’s infrastructure needs three years ago.

INSW, which recommended that WestConnex be delivered in three to five stages, estimated reduced travel times of between 15 and 35 minutes between Sydney’s west and south west and the airport and Port Botany.

So that’s the benefit aimed at you: most of us will save between 30 minutes and 70 minutes a day when driving to work and back home every day when this $10 billion road infrastructure is completed.

That’s between two and a half hours and almost six hours a week you can spend with your family instead of sitting in the car stuck in another bottleneck at Concord or Strathfield.

It’s as simple as that, and the pity is that it should have been done 30 years ago.

“Infrastructure NSW has conducted a rigorous appraisal of the state’s infrastructure needs and we accept its view that WestConnex is the best initial project for our community and our economy,’’ said the then premier, Barry O’Farrell.

And of course he was right.

So why am I ranting and raving about it now?

While it will almost certainly be a pathetic failure, there is an appalling inner city campaign to disrupt, stall or stop WestConnex.

The parish pump campaign by one media outlet in particular is so unbalanced the rag should be renamed the Sydney Morning Bugle.

It is obvious that they are carrying the flag for their ever diminishing readership in Newtown and Glebe with this puerile, not in my backyard coverage.

Hopefully the state and federal governments will stand strong in the face of undermining of something that’s so obviously in the national interest. 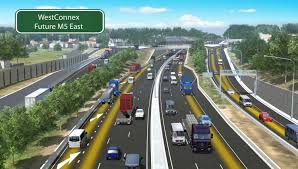 Let’s just take a look at what WestConnex will bring:

· The M4 from Parramatta to North Strathfield widened; and then extended to Taverners Hill. The extension will be designed to allow the renewal of Parramatta Road by putting some sections underground, and some sections above ground;

· A tunnel from Taverners Hill to the St Peters area via the Camperdown area (the Inner West bypass);

· A Sydney Airport Access Link between the St Peters area and the M5 East tunnel, with links to the airport terminals, Port Botany and surrounding industrial areas; and

· Duplication of the M5 East Motorway to King Georges Road, including a new tunnel.

But more importantly, WestConnex takes Sydney to the next level as a world class city that actually boasts world class transport infrastructure for all of its citizens.

It will take a city with roads that resemble carparks during peak hours and transform it into a metropolis that’s on the move – wherever you live in this great corner of the world.

More than 40 years experience in the news media, most of them as editor of local newspapers across the Sydney metro area, but a few years working as a sub-editor with the metros. Lots of awards, both as a reporter and editor, but says he values just as much Community Service Awards from Campbelltown City Council in 2004 and 2016. Took a voluntary redundancy in 2014 from Fairfax Community Newspapers after 21 years there. Loves the digital world, because ''there's no question it's the future''. Eric promises his hard hitting but fair approach won't change when he reports the news via cyber space.
View all posts by Eric Kontos
Another loss as Tigers capitulate to Titans
Two quick goals and Eagles fly high

2 Responses to Why we must stand up for WestConnex