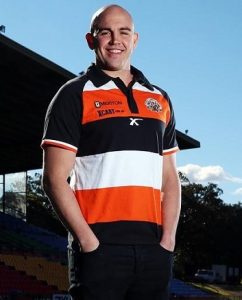 Liam Fulton, who is having some success in his very first year as coach of the Campbelltown City Kangaroos in the Group 6 competition, was last night made a life member of the Wests Tigers.

Fulton, who was a member of the club’s 2005 premiership winning team, played 162 games for Wests Tigers.

His life membership was announced as part of the club’s end of season presentation night held in Lilyfield.

Vice captain Elijah Taylor took out the major Kelly-Barnes award after being named 2017 Wests Tigers player of the year.

The 27-year-old, who recently extended his contact at Wests Tigers until the end of 2020, also took out the members’ player of the year award following a superb season.

Playing his first full season at Wests Tigers, Taylor was a standout for Ivan Cleary’s side throughout the year, averaging more than 42 tackles per game while also contributing five tries, four line breaks and a try assist. Despite missing three games with a shoulder injury, Taylor still finished fifth in the NRL for most tackles made this year with 891.

Tedesco, who is off to the Roosters in 2018, was voted by his teammates as the players’ player ahead of Nofoaluma and Taylor. 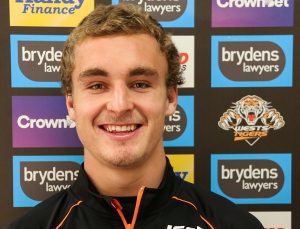 Despite missing the final few weeks with injury, rising star Jacob Liddle was named rookie of the year.

The 20-year-old played 13 games, chalking up four tries and an average of 25 tackles per game to take out the gong, narrowly beating Matt Eisenhuth and Moses Suli.

Jeremy Marshall-King (player of the year) and Nathan Milone (players’ player) took out the honours for the club’s Intrust Super Premiership side, while captain Daniel Peck received both Holden Cup awards in a superb season from the Toukley Hawks junior.

Jamal Idris took out the community achievement award for his tireless efforts off the field in 2017, while community and fan engagement manager Shaun Spence was named club person of the year.

“On behalf of everyone at Wests Tigers, I’d like to congratulate Elijah and all our winners,” said club ceo Justin Pascoe.

“We’re also proud to welcome Liam, Ben and Harry as Life Members, and I’d like to thank them all for their tremendous contributions to Wests Tigers on and off the field,” he said.