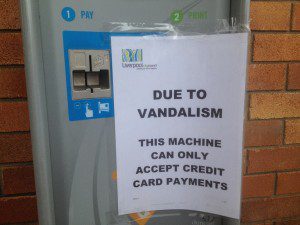 A MOMENT IN LIVERPOOL – I spotted this parking meter ticket machine in the Northumberland Serviceway Lane, Liverpool while checking it out for another story last week.

I have a confession to make: As the one who does the shopping in our household, I recently started checking out Aldi.

Like most people it’s either Coles or Woolies for me and the odd Macarthur and Liverpool region butcher and fruit and veggie shop to get the lot for the week.

And like most shoppers, I have noticed that very few things go down in price, never mind the Down, Down ads from Coles.

It’s up, up and away for pretty much everything, but what has really got me worried is the price we pay for basic stuff like bread and milk, meat and fruit and veggies.

This is not something you will hear politicians talk about, but maybe the time has come for them to pay attention.

I pay $5 for a half decent loaf of sliced sourdough and it takes me three to four weeks to get through it, but I imagine a family with kids will need around one loaf a day.

OK, you could say they can buy cheaper bread, but you get what you pay for mostly, and my $5 loaf is not made in some small, boutique, wood fired bakery in Surry Hills.

It’s a very basic sliced sourdough made in Liverpool, so if you bought five or six a week to feed a family of five or six, there’s a $30 hole in the family budget. Just for the bread for one week.

For milk made by well known dairies you won’t pay much less than $3 for a litre.

Yes, again, you can pay a lot less for a no name milk product but quality issues arise once again. You have to draw the line somewhere do you get the balance right between price and quality.

Milk for a week for our family of six will set them back between $20 and $30. 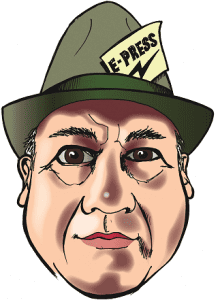 So for just milk and bread it’s conservatively around $50 a week. Over the year, that’s $2,500. Just for milk and bread for an average family. Are you listening Joe Hockey?

Last week I paid $7 a kilo for Pink Lady apples. I bought nearly two kilos and took home to find out they were all bashed and brown on the inside.

But that’s not the point. The price is the point.

We get told we must eat fruit and veggies but how do you do that when the humble apple is unaffordable unless you’re earning half a million a year.

So you get the picture: shopping around for a lot of things, checking out Aldi and other outlets, pick up some good value stuff wherever possible, but it’s a mug’s game.

And don’t forget that service is almost non existent in our major stores. The few staff still employed do their best – in fact they are my heroes because they try so hard to help customers – but there just aren’t enough of them to go around.

And finally, I just don’t like the idea of my old supermarket, Woolies or Coles, turning into a giant with tentacles into just about everything I buy, from petrol to grog and insurance.

Bottom line in all this is that the average person should not go broke buying bread and milk and one or two other basics.

Nor should they be forced to shop around for a better price on their groceries.

Somebody’s got to do something about this before it really gets out of hand.

» A report that really frightened me this week said that Australia has just two weeks’ worth of petrol if something happens and delivery stops suddenly. We import all of our fuel so we are really vulnerable to a break in supply. The report said 75 other countries had taken measures to build up emergency supplies so they could withstand loss of supply for a lot longer than a fortnight.

But not the Lucky Country. Our politicians are too busy insulting each other – or us – to notice what’s really going on around them. Fingers crossed our luck can hold for a while longer, because that’s all we got, folks.

More than 40 years experience in the news media, most of them as editor of local newspapers across the Sydney metro area, but a few years working as a sub-editor with the metros. Lots of awards, both as a reporter and editor, but says he values just as much Community Service Awards from Campbelltown City Council in 2004 and 2016. Took a voluntary redundancy in 2014 from Fairfax Community Newspapers after 21 years there. Loves the digital world, because ''there's no question it's the future''. Eric promises his hard hitting but fair approach won't change when he reports the news via cyber space.
View all posts by Eric Kontos
Anonymous push for Kentlyn subdivision
Hume Highway safety review and improve

One Response to We’re paying too much for bread and milk but does anyone care?