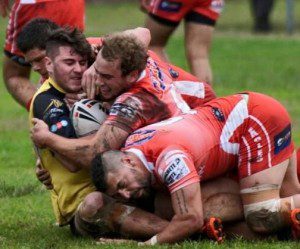 The Eagles defence cracked at the end against Wenty on Sunday.

The Eagles fought back but just couldn’t get on top of the visitors, eventually going down 42-24 in the round 15 fixture.

Now East Campbelltown, the reigning premiers, will have to regroup before hosting Windsor Wolves next Sunday at Waminda Oval.

Wentworthville came out all guns blazing from the kick off, racing to a 20-0 lead in the first 25 minutes.

When the Eagles finally got some possession they replied with a try to Mason Talolua, but fullack Baker’s conversion attempt was waved away.

At least the home side were on the scoreboard, albeit 16 points behind at 20-4.

But flying winger Craig Moustakas scored next for the Eagles and again Baker’s conversion missed, so the score stayed at 20-8.

Chris Standing just before half time then showed good footwork to get over the line for a third Eagles try.

When Baker landed the goal it really brought the home side back into the contest as the teams went off to the break with Wentworthville just six points ahead at 20-14.

Wenty came out strong again in the second half and scored in the early minutes to extend their lead to 12 at 26-14.

Eagles hit back with a touchdown to Mason Talolua – his second for the day. Baker converted the try to make the score 26-20 in favour of Wenty.

The Eagles then got within two points when Mendella Faleafaga scored off a great short ball from Baker 10 minutes into the second stanza.

The next 20 minutes saw great defence and increased intensity from both teams and it was not clear who was going to crack.

Unfortunately for the home fans it was the Eagles defence which opened up and Wenty went on to score three more tries to run away with the match and the premiership points.

Best for the Eagles was Mason Talolua, John Da Silva and Guy Thompson

The Eagles are at home again this Sunday when they host the Windsor Wolves at Waminda Oval.