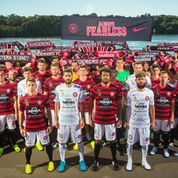 Western Sydney Wanderers have unveiled the club’s official Nike home and away kit for the Hyundai A-League 2014/15 season with the club’s largest ever team photo.

Set on the bank of the Parramatta River at the iconic heritage site, Newington Armory, the club’s largest team photo not only marks the launch of the new Nike kit ahead of the Wanderers’ third season in the Hyundai A-League but also recognises the club’s fearless fans as part of the team.

Western Sydney Wanderers is Australia’s ‘newest, oldest club’ with Western Sydney being Australia’s historical home of football dating back to 1880. The new Nike home and away kit reflects this heritage and vision, combining the very latest in performance innovation driven by athlete insights, industry leading technology and environmental stability with design details that reflect the proud football history in the area.

Western Sydney Wanderers CEO John Tsatsimas said the new jerseys were perfect for the club: “I’ve seen passion for the sport here that exists nowhere else in Australia, both as a kid growing up in the area and as CEO of the newest team in the league,” explained Tsatsimas.

“A club’s jersey is a statement of pride and gives fans a sense of belonging in the community. I’ve seen this first hand with the Wanderers fans well and truly embracing the jersey, creating a sea of Red & Black at each game.

“Given our club was founded by the community for the community, it’s great to have a partner in Nike who recognises this. Like us, Nike is committed to building deeper connections with football fans, so it felt fitting to invite our supporters to be part of this occasion.”

The new kit’s design details reflect this pride, featuring the Western Sydney Wanderers crest that captures the unity and intertwined multicultural community that the team represents.

Andrew Poole, Nike Pacific General Manager explained how a lot of thought went into the design of the new kits.

“When designing the new jersey we wanted to ensure the hoops were a prominent feature as they’ve been part of the jersey and worn with pride since the beginning,” said Poole.

“The home jersey maintains the iconic red and black hoops while the new away jersey features clean and classic grey and white hoops.”

One of the Wanderers’ off-season signings, Brazilian playmaker Vitor Saba, met the club’s passionate fan base in person for the first time at the reveal and is looking forward to pulling on the new kit in the season opener against Melbourne Victory on October 10.

“It was great to finally meet the Wanderers’ fans in person, they’re one of the main reasons I came to the club,” said Saba.

“I’ve been following the team for a while and I can’t wait to put on this new jersey and run out on the field wearing the Wanderers colours.”

The new kit has been designed to offer players the very latest in cutting-edge performance innovation. Nike Dri-Fit technology works to draw sweat away from the body while laser-cut ventilation improves performance by increasing air circulation.

Players will also be sporting a new and updated fit based on 3D body scans of many of the world’s leading footballers in addition to the very best body armour with Nike Pro Baselayer, which provides protection without sacrificing the need for lightweight breathability.

More than 40 years experience in the news media, most of them as editor of local newspapers across the Sydney metro area, but a few years working as a sub-editor with the metros. Lots of awards, both as a reporter and editor, but says he values just as much Community Service Awards from Campbelltown City Council in 2004 and 2016. Took a voluntary redundancy in 2014 from Fairfax Community Newspapers after 21 years there. Loves the digital world, because ''there's no question it's the future''. Eric promises his hard hitting but fair approach won't change when he reports the news via cyber space.
View all posts by Eric Kontos
Georges River habitat gets a Green Army boost
10 networking tips for people who hate networking