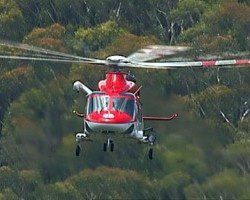 An ambulance helicopter taking part in the rescue operation

Two young men have been winched to safety after the small plane they were travelling in was forced to make an emergency landing in bushland near Macarthur.

About 3.15pm yesterday (Thursday 2 April 2015) emergency services were notified of a small Jamaroo aircraft that was forced to make an emergency landing south of Camden.

Emergency services immediately commenced a search for the aircraft, locating it in bushland in the Nattai Conservation Park.

Two men in their 20s travelling in the plane were winched to safety by a NSW Ambulance helicopter, pictured. Neither are seriously injured.

The plane is partly submerged in a river in the national park.

More than 40 years experience in the news media, most of them as editor of local newspapers across the Sydney metro area, but a few years working as a sub-editor with the metros. Lots of awards, both as a reporter and editor, but says he values just as much Community Service Awards from Campbelltown City Council in 2004 and 2016. Took a voluntary redundancy in 2014 from Fairfax Community Newspapers after 21 years there. Loves the digital world, because ''there's no question it's the future''. Eric promises his hard hitting but fair approach won't change when he reports the news via cyber space.
View all posts by Eric Kontos
Liverpool deputy mayor revolving door?
Jai Rowell takes his demotion on the chin