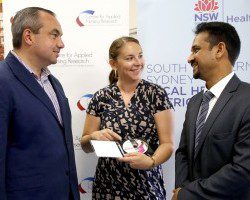 Jai Rowell, left, visiting a local hospital during his stint as a minister in the NSW Government. He has now been dropped by Premier Mike Baird.

Jai Rowell, who has been dumped from the NSW Ministry by Premier Mike Baird, seems to have accepted his fate with grace.

Rowell, who is the MP for Wollondilly, has promised to work hard for his constituents in the next four years.

“It has been both a pleasure and an honour to serve in the first Baird Ministry as the Minister for Mental Health and Assistant Minister for Health,’’ said Mr Rowell in his public statement.

“As Minister I was able to launch once in a generation reforms to the way we deliver vital mental health services in NSW, achieving a $115m boost to strengthen prevention and early intervention and increase community based care.

“During my time in cabinet I was also successful in ushering in significant reforms to the Mental Health Act making it easier for people experiencing mental illness and their carers to access initial assessments and ongoing care.

“The cabinet team announced today is a strong team and I am confident they will build on the considerable record of achievement during the NSW Liberals and Nationals first term in Government.

“I look forward to continuing to work hard in my capacity as local member in ensuring that we deliver upon the election commitments made to the people of Wollondilly.”

More than 40 years experience in the news media, most of them as editor of local newspapers across the Sydney metro area, but a few years working as a sub-editor with the metros. Lots of awards, both as a reporter and editor, but says he values just as much Community Service Awards from Campbelltown City Council in 2004 and 2016. Took a voluntary redundancy in 2014 from Fairfax Community Newspapers after 21 years there. Loves the digital world, because ''there's no question it's the future''. Eric promises his hard hitting but fair approach won't change when he reports the news via cyber space.
View all posts by Eric Kontos
Two men survive emergency landing in bush
French film festival bound for Casula Powerhouse