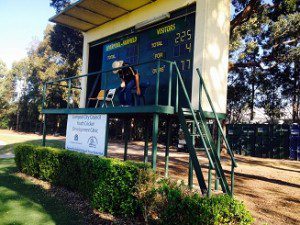 The Ghosts bowlers kept the scoreboard attendants busy yesterday at Rosedale Oval where they skittled the home side for 134.

The Ghosts skittled Liverpool for 134 yesterday at Rosedale Oval and in doing so have given their team a mighty push towards semi final cricket this season.

The win puts the Ghosts in fifth place on the ladder, only two points behind third placed Penrith and a point behind Manly, who are in fourth spot.

Heading into day two of the Belvidere Cup Round 12 clash with the Lions, the Ghosts lost strike bowler Tom Rogers who had injured himself in the mid-week Futures League fixture in Canberra.

With the knowledge that the Rosedale Oval surface was batting-friendly and weather conditions all week had been perfect, one would assume that the Ghosts would have been quietly questioning whether their previous week’s total of 207 was going to be enough.

However, the Ghosts bowlers applied good pressure from the start with debutante Luke Courtney impressing with his speed and control.

Together with Luke Webb, they created early chances, taking wickets and setting the platform for the other bowlers to follow.

Courtney took the first two wickets to fall, in a great first grade debut, while Webb was rewarded for his persistence with a personal best – 5-36 from 15 overs -his best figures in first grade,.

The statistics of the other Ghosts bowlers reflected their tremendous team effort.

Spinner Jordan Browne, although he went wicketless, bowled tight with only 8 runs coming from his five overs.

While the day belonged to Webb, there was a quiet excitement about teenager Luke Courtney.

With three rounds remaining in this season before the final series, skipper Josh Clarke is far from getting carried away.

“We will need to take another step up,” was Clarke’s assessment of having to face Blacktown, Gordon and Northern Districts in the last three rounds.

The three sides are positioned seventh to ninth on the ladder although they have the same points and are all four points behind the Ghosts.

• In the second grade match, The Ghosts’ total of 318 was always going to be a tough ask for the Lions, who were dismissed for 199 under perfect skies at Raby.

Jarred Lysaught was the Man of the Match on the back of his 84 runs last week and three wickets yesterday.

Another highlight of the match was the superb fielding of youngster Ethan Gillion throwing the stumps down twice from square to the stumps.

The Lions showed only one period of resistance with a 50 run partnership.

Defending 183 runs from the previous week, Fairfield were dismissed for 123 on Fairfield Oval.

• In fourth grade, the Ghosts had a tough day at Raby despite taking five wickets before Fairfield passed their total of 126.

• Batting on after a rain interrupted Day One on Don Dawson Oval, Cabramatta, the Ghosts premiership leading fifth grade team were rolled for 188.

In the afternoon session in which Nathan Baker took 2/32, the Lions fell three runs short when the day’s allocated overs were completed, the match declared a draw.

♦ As the Premier Cricket season hots up the Ghosts return home next weekend to play a Saturday/Sunday Game against Blacktown DCC. It promises to be a weekend of intense cricket at the Raby Sports Complex for both players and local fans of the Campbelltown Camden Ghosts.

Computers great, but there’s a downside
Skate clinics attract the best on offer