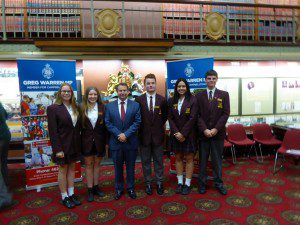 Fact finding mission: MP Greg Warren with some of the Campbelltown region student leaders who visited the NSW Parliament.

The students visited both chambers of Parliament, the Legislative Assembly and Legislative Council, and learned about the process by which laws are created in Australia’s oldest parliament.

After the tour, Mr Warren presented each student with a certificate congratulating them on their appointment as a student leader for the 2016 school year.

“It’s fantastic to have such a strong group of student leaders from Campbelltown who are passionate advocates for young people – whether that’s in their school community or the broader Campbelltown community,’’ Mr Warren said.

“The NSW Parliament is the oldest parliament in Australia, and it’s great to see the leaders of tomorrow learning about its rich history and traditions.

“These students regularly go above and beyond what is required of them in advocating for their peers, and this recognition is just a small way of saying thanks.”

More than 40 years experience in the news media, most of them as editor of local newspapers across the Sydney metro area, but a few years working as a sub-editor with the metros. Lots of awards, both as a reporter and editor, but says he values just as much Community Service Awards from Campbelltown City Council in 2004 and 2016. Took a voluntary redundancy in 2014 from Fairfax Community Newspapers after 21 years there. Loves the digital world, because ''there's no question it's the future''. Eric promises his hard hitting but fair approach won't change when he reports the news via cyber space.
View all posts by Eric Kontos
Six emerge victorious from East Coast Nationals
Men urged to join crusade to end violence against women