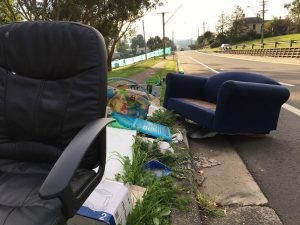 It’s got some of the very best views of Campbelltown.

Hundreds, maybe thousands of local motorists drive past it every day.

And what they all notice aren’t the sweeping views of a growing town but of the rubbish pile that’s always outside the block of flats complex built some years ago on the southern side of Broughton Street.

It’s almost like a third landmark to add to St Elmo’s and the Centennial Park, except it’s really a disgusting eyesore.

Anyone who drives up the hill on their way to East Campbelltown, Airds, Ruse or Kentlyn will have seen it.

For the benefit of those who haven’t seen it, it’s not the same rubbish that’s been there for weeks or months.

Taking a guess, someone’s moved out of one of the flats and the rubbish is all the stuff they didn’t want any longer.

Well, that’s fine, but why does it need to be placed on the footpath, forcing pedestrians to have to walk around it.

Sometimes there’s so much it spills onto the roadway.

But while the amount may vary, one thing is constant: there is rarely a day when there’s no pile of ugly rubbish strewn across five or six metres at this part of Broughton Street.

We have gone beyond the point of accepting our city being treated as a giant garbage tip.

Indeed that’s been one of the really positive changes in Campbelltown in the past 10 years.

Our entire place, from Glenfield to St Helens Park and from Kearns to Kentlyn, has looked very sharp, with the council keeping footpaths mowed regularly and staying on top of the rubbish situation.

But we want it to stay that way, and if anything, improved.

The little Broughton Street “rubbish tip’’ needs to be quickly eliminated to make sure it doesn’t spread.

It shouldn’t be hard for council to work with the people who own the flats complex to come up with a permanent solution. 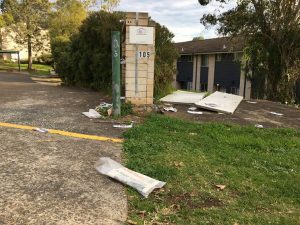 The front of the block of flats complex.

More than 40 years experience in the news media, most of them as editor of local newspapers across the Sydney metro area, but a few years working as a sub-editor with the metros. Lots of awards, both as a reporter and editor, but says he values just as much Community Service Awards from Campbelltown City Council in 2004 and 2016. Took a voluntary redundancy in 2014 from Fairfax Community Newspapers after 21 years there. Loves the digital world, because ''there's no question it's the future''. Eric promises his hard hitting but fair approach won't change when he reports the news via cyber space.
View all posts by Eric Kontos
Gloom and doom in Glen Alpine over medium density housing bid
Brazen sport park thief pulls out gun when challenged