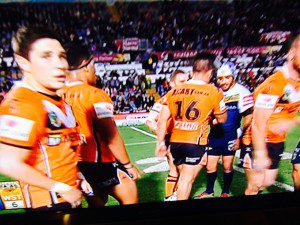 After the week in hell.

And so it was.

In the deep north of Australia.

More than 2,000 kilometres from Balmain. Even more from Campbelltown. About 50 more, give or take.

It was 20-0 after 20 minutes, but most Wests fans would have believed the Tigers were still a chance of stealing the two premierships points from Townsville.

But it was 30-0 after 30 minutes and it was at this p0int it’s agreed that if you’re watching a rugby league game the team in arrears cannot possibly come back and win.

And then, after Aaron Woods, that most magnificent Tiger of them all, scored, and with the score at 60-6 we wondered if the Devil had a hand in this match up and the proof would be in a final score of 66-6. A triple six, of all things.

But that devil-may-care dude, Jonathan Thurston, decided to let everyone know he had no respect at all for Robbie and his boys by trying t

o convert the last try of the match with his left foot.

Of course, the man with the funniest laugh in the whole sporting universe missed and the final score was 64-6.

But it was still rock bottom for the Tigers, who face last year’s premiers, the Roosters, next Monday night.

More than 40 years experience in the news media, most of them as editor of local newspapers across the Sydney metro area, but a few years working as a sub-editor with the metros. Lots of awards, both as a reporter and editor, but says he values just as much Community Service Awards from Campbelltown City Council in 2004 and 2016. Took a voluntary redundancy in 2014 from Fairfax Community Newspapers after 21 years there. Loves the digital world, because ''there's no question it's the future''. Eric promises his hard hitting but fair approach won't change when he reports the news via cyber space.
View all posts by Eric Kontos
Minto’s community hub is back
Rebels arrested over assault