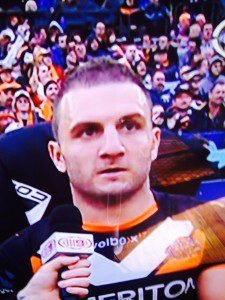 So the Wests Tigers are off on their 2,000km trek to Townsville this weekend, where they line up against the Cowboys in Round 22 of the  2014 NRL competition.

If the long distance was the only obstacle between the Tigers and a win on Saturday night (7.30pm on Fox Sports 1) things would be looking not so bad.

But, unfortunately it is not. In fact, things in Tiger-land are so grim, only something akin to a miracle will have to take place for them to make the long trip back home with two premiership points in their pockets.

Amazingly, it was only just over two weeks ago that Team Wests were on top of the world, having demolished Canterbury to state their premiership credentials.

But as the Tigers soon proved, it does not take a long time to go from the penthouse to the chook house.

Two heavy losses since then to the Dragons and Melbourne, the Robbie Farah saga, and other internal rumblings have pulled the rug from under their feet. Add a stack of injuries and a couple of suspensions, and things are as crook as Rookwood.

Injuries have meant that this Saturday night young halfback wizard Luke Brooks is out for the second week in a row with a shoulder problem. Joining him on the sidelines is winger Pat Richards. That’s why there were a couple of TBAs next to where their names should have been.

Waiting for whoever manages to get on the park for the Tigers in Townsville is Jonathan Thurston  and his Cowboys, who are coming in to some good form of late.

But, nothing is impossible, even if you need a miracle, so I won’t rule out the Tigers completely. Besides, if things can go from bad to worse, they can also get better eventually.

But the bottom line is that I will be as pleasantly surprised as every other Wests Tigers fan if they’re on 24 competition points come Sunday morning.

More than 40 years experience in the news media, most of them as editor of local newspapers across the Sydney metro area, but a few years working as a sub-editor with the metros. Lots of awards, both as a reporter and editor, but says he values just as much Community Service Awards from Campbelltown City Council in 2004 and 2016. Took a voluntary redundancy in 2014 from Fairfax Community Newspapers after 21 years there. Loves the digital world, because ''there's no question it's the future''. Eric promises his hard hitting but fair approach won't change when he reports the news via cyber space.
View all posts by Eric Kontos
Get rid of your chemicals
Riverfest has it all