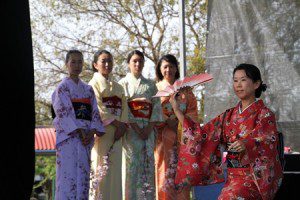 Campbelltown’s annual Riverfest has something for everyone.

Celebrate our local environment and cultural diversity at Riverfest on Saturday, August 30, and you’ll be in for an experience like no other.

Featuring loads of interactive workshops, stalls and entertainment, Campbelltown City Council’s Riverfest has something for everyone.

Get ready to meet some new animal friends, gain some useful tips from water-saving heroes Tapstar and Dripette, or feel the rhythm of traditional dances from around the world. Tree hugging takes on a whole new meaning, with bright and leafy roaming entertainers giving expert advice on all things green.

Special guests Mr Peabody and Sherman will take everyone on an international dance adventure that spans the four corners of the globe and travels back in time from the days of the Pharoahs to the Russian Revolution. Join Mr Peabody on his time travel adventure to hear about faraway places and learn some new moves! This year’s event will also showcase the vibrancy of Japanese culture in celebration of the 30th anniversary of the Campbelltown-Koshigaya Sister City relationship, with displays, craft activities and stage entertainment highlighting the country’s unique customs. Grab your copy of the Riverfest Passport and you could be in with a chance to win great prizes just by completing an activity at participating stalls and collecting passport stamps.

Mayor of Campbelltown, Councillor Clinton Mead, said Riverfest offered plenty of opportunities to learn about sustainability and experience cultures from around the world.

“This makes Riverfest a melting pot of ideas, creativity and fun, and one of our most exciting community celebrations,” Cr Mead said.

Riverfest will be held at Koshigaya Park from 11am to 3pm, and is coordinated by Council in association with the National Parks Association and Macarthur Diversity Services Initiative.

More than 40 years experience in the news media, most of them as editor of local newspapers across the Sydney metro area, but a few years working as a sub-editor with the metros. Lots of awards, both as a reporter and editor, but says he values just as much Community Service Awards from Campbelltown City Council in 2004 and 2016. Took a voluntary redundancy in 2014 from Fairfax Community Newspapers after 21 years there. Loves the digital world, because ''there's no question it's the future''. Eric promises his hard hitting but fair approach won't change when he reports the news via cyber space.
View all posts by Eric Kontos
Tigers up against Cowboys
Aboriginal strategy launched