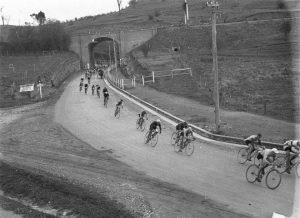 Cycling clubs in Wollondilly and Macarthur were once very popular, with regular weekend races as well as cycle races at the local annual shows.

The big one was the popular Goulburn to Sydney road race, which had our region included as part of the route.

Cycling is not as popular as it used to be but if you are interested to know about the good old days you need to head to the Oaks this Saturday.

The Oaks Historical Society have secured from the History Council of NSW a guest speaker as part of the annual History Week celebrations.

He is cycling historian Marc Rerceretnam and on Saturday he will be talking about the history of cycling clubs and communities in Australia.

“We are very lucky to have him and we hope to attract the local cycle clubs, interested cyclists and locals interested in history,’’ says Trish Hill, president of The Oaks Historical Society.

This will be a free event and will include pop-up displays about exciting cycling races, people and events in this region.

It will be held in the Wollondilly Heritage Centre & Museum, 43 Edward Street, The Oaks at 2pm this Saturday, September 2.

The heritage centre is run by The Oaks Historical Society, a volunteer organisation that meets on the first Monday night of each month.

The society also produces a newsletter monthly, which members receive either by post or email.

“We are open every weekend 10am – 4pm and public holidays and weekdays by appointment,’’ says Trish Hill.

“Thursdays of the school term we conduct a schools hands-on-history program where the children experience what life was like in earlier times.

“We are a busy museum with volunteers dedicated to their roles.

“We try to be a bit progressive, hence securing our history week guest speaker from the History Council.’’

Moving out, but how far is too far when you have children
Construction starts on 38 boutique terraces in Gledswood Hills