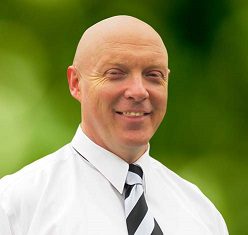 The defeated state member for Campbelltown, Bryan Doyle, has issued a public statement following the disastrous result in Saturday’s election.

The one term Liberal Party member paid tribute to his electorate team and reiterated his pride in being a Campbelltown local.

Mr Doyle gave up a 27 year career in the police force to contest the safe Labor seat for the Liberals in 2011.

He comfortably won that election but there was always the chance the seat would naturally swing back to its traditional Labor colours four years later.

It was one of the biggest swings against the Baird government, which managed to be returned for a new four year term with a reduced majority.

Doyle was up against the natural swing back and a very good candidate in Greg Warren.

This is what Mr Doyle said in his statement issued to the media this morning:

“I thank the people of Campbelltown for the privilege of representing them in the NSW Parliament from 2011 to 2015.

“During this time I have helped changed the future of Campbelltown for the better.

“Campbelltown is now a Regional City, the first stage of the Campbelltown Hospital Upgrade is complete with the planning for the $300 million Stage 2 to commence this year, the M5 widening and upgrades to Narellan Road, Dharawal National Park, Ingleburn Railway Station upgrade.

“I have enjoyed working with all our community groups, schools and individual constituents who sought my advice and counsel.

“During this time I have been well supported by my electorate office team who shared my dream for a better Campbelltown. I couldn’t have wished for better friends.

“I would also like to thank the many volunteers who helped on the journey, and those who have sent kind messages of support.

“I am proud to say Campbelltown is my home and I look forward to its continued growth with our Premier Mike Baird’s plan to continue to Rebuild NSW,’’ Mr Doyle said.

More than 40 years experience in the news media, most of them as editor of local newspapers across the Sydney metro area, but a few years working as a sub-editor with the metros. Lots of awards, both as a reporter and editor, but says he values just as much Community Service Awards from Campbelltown City Council in 2004 and 2016. Took a voluntary redundancy in 2014 from Fairfax Community Newspapers after 21 years there. Loves the digital world, because ''there's no question it's the future''. Eric promises his hard hitting but fair approach won't change when he reports the news via cyber space.
View all posts by Eric Kontos
Rudan proud of his Sydney United 58 youngsters
Mayor congratulates new MPs Warren, Chanthivong