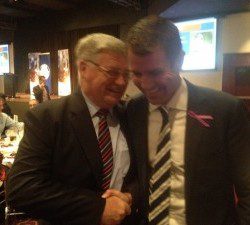 The Campbelltown mayor, Paul, Lake, has congratulated his colleague, Councillor Anoulack Chanthivong, on his election to the NSW parliament at Saturday’s state election.

It means the seat stays in Labor hands, as it was previously held by Doctor Andrew McDonald, who stepped down and did not contest the election.

“I am really pleased for Anoulack and congratulate him on winning in Macquarie Fields,’’ Mayor Lake said.

“He [Anoulack] was harshly done by in 2011 when  he was stopped from running, so it’s good to see him perform so well.

“Macquarie Fields wasn’t an easy seat to win after the redistribution so he’s done extremely well and I wish him well in the next four years.

“But I also want to pay tribute to Andrew McDonald who always tried to do the right thing while he was the serving member,’’ Mayor Lake said.

The mayor said he was also looking forward to working together with the new member for Campbelltown Greg Warren.

“I have a good working relationship with Greg Warren; He was mayor when I was mayor previously and we got on really well, he’s a good fellow.

“I know that like me he’s also passionate about the Spring Farm road proposal so I hope we can get together to gain the support of the member for Camden, Chris Patterson, to get this project going.

“I really hope that Chris Patterson comes to the party, as it will benefit his constituents more than the residents of Campbelltown.

“But I want to congratulate Greg Warren and wish him all the best for the next four years.

“I also want to thank and wish [defeated MP] Bryan Doyle well, he was a good member, a good bloke, and he always promoted Campbelltown as the opal of the south west.’’

More than 40 years experience in the news media, most of them as editor of local newspapers across the Sydney metro area, but a few years working as a sub-editor with the metros. Lots of awards, both as a reporter and editor, but says he values just as much Community Service Awards from Campbelltown City Council in 2004 and 2016. Took a voluntary redundancy in 2014 from Fairfax Community Newspapers after 21 years there. Loves the digital world, because ''there's no question it's the future''. Eric promises his hard hitting but fair approach won't change when he reports the news via cyber space.
View all posts by Eric Kontos
Defeated MP Bryan Doyle thanks Campbelltown
Don’t be fooled: April 1 is Falls Day