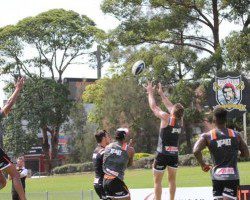 Wests Tigers coach Jason Taylor has once again ticked the consistency box in naming his team for the round seven clash with Canberra Raiders at Leichhardt Oval this Sunday afternoon.

In contrast injuries and poor form meant a different 17 for just about every Wests match in the previous couple of seasons.

But in what must be a record for the club in recent years Taylor has been able to be consistent when naming his teams so far in season 2015. Only a couple of suspensions have so far forced him to make slight changes.

Form certainly hasn’t been an issue, which obviously has helped Taylor’s cause, with the team three wins from six starts, and possibly unlucky not to have snagged one or two wins from those defeats.

One of the few players whose spot may be slightly under threat is our own Chris “Lawrence of Leumeah, who has been solid without being spectacular.

Lawrence, the youngest player to debut for the Tigers, will play his 160th match on Sunday.

Maybe this Sunday’s clash against Canberra at iconic Leichhardt Oval will help Lawrence rediscover his mojo with a couple of four pointers against Ricky Stuart’s side to add to his career tally of 68.

Don’t want to put any pressure on Chris, one of the nicest fellows playing the game at the elite level, but Taylor has options in Tim Moltzen and Delouise Hoeter, the centres named in the Wests Tigers NSW Cup team taking on Illawarra this Saturday in round 7. Matthew Lodge has also been named to make his return from a knee injury on the NSW Cup team bench.

The only change to the NRL team from the one that was named last week by Jason Taylor comes on an extended interchange bench with back up hooker Joel Luani replacing Asipeli Fine.

Wests Tigers and the Raiders last clashed at Leichhardt Oval in the 2010 season.

More than 40 years experience in the news media, most of them as editor of local newspapers across the Sydney metro area, but a few years working as a sub-editor with the metros. Lots of awards, both as a reporter and editor, but says he values just as much Community Service Awards from Campbelltown City Council in 2004 and 2016. Took a voluntary redundancy in 2014 from Fairfax Community Newspapers after 21 years there. Loves the digital world, because ''there's no question it's the future''. Eric promises his hard hitting but fair approach won't change when he reports the news via cyber space.
View all posts by Eric Kontos
Out of the comfort zone to get things done
What’s your definition of friendship?