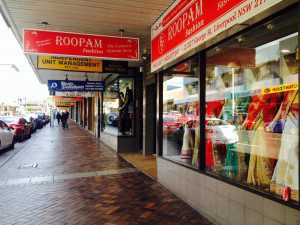 George Street will come to life for Starry Sari night next month.

THE Liverpool City Centre will glisten with the return of the magical Starry Sari Night along George Street on Sunday, September 21, between 3pm and 10pm.

George Street, which is a one way thoroughfare from Elizabeth Street to Scott Street, will be closed to traffic for the day with pedestrian access only.

Liverpool City Mayor, Ned Mannoun said: “This event will build on the success of the inaugural Starry Sari Night event which was held last year attracted well over 3,000 people.”

The night will celebrate the glamour of Bollywood with a community event for everyone to enjoy which includes an open-air screening of Yeh Jawaani Hai Deewani (Rated PG).

There will be performances by The Street University’s The Pioneers, Julian Simonsz from The Voice, special guest TV Chef, Fast Ed from Better Homes and Gardens, tracks played by DJ J Rok, food stalls and children’s activities.

“Starry Sari Night brings fun and vibrancy into the heart of Liverpool by injecting colour into the city with a Sari Fashion Showcase,” the mayor said.

“Once again Starry Sari will highlight and embrace the unique qualities of our diverse community as well as prompt us to come together and enjoy the company of neighbours and friends,” he said.
“Providing high quality iconic events that support the local night-time economy and showcase the area are part of Council’s plans to transform Liverpool into a dynamic and active city.

“Celebrations like these are vital and help create a safer and more inclusive Liverpool,” said the Mayor.

This event is an alcohol free event provided  by Liverpool City Council and supported by Eros International and the Liverpool Leader.

More than 40 years experience in the news media, most of them as editor of local newspapers across the Sydney metro area, but a few years working as a sub-editor with the metros. Lots of awards, both as a reporter and editor, but says he values just as much Community Service Awards from Campbelltown City Council in 2004 and 2016. Took a voluntary redundancy in 2014 from Fairfax Community Newspapers after 21 years there. Loves the digital world, because ''there's no question it's the future''. Eric promises his hard hitting but fair approach won't change when he reports the news via cyber space.
View all posts by Eric Kontos
It will be a vintage day for the Kids of Macarthur
Our councils get federal cash injection