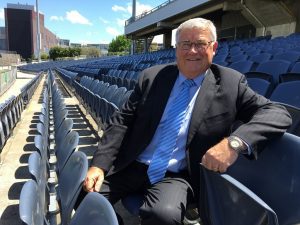 You’ve got to spend money to make money, says Cr Paul Lake, who is pushing a plan to bring big time sport to Campbelltown Sports Stadium.

Campbelltown Sports Stadium could end up hosting big time events such as World Cup qualifiers and rugby internationals if council approves a new sponsorship plan at its meeting tonight.

Councillor Paul Lake wants council to set aside at least $500,000 from its reserves to implement the plan to entice high profile sport here.

The former mayor has lodged a notice of motion, which will be voted on tonight at Campbelltown Council’s meeting.

“This is about both making sure our great stadium is used on a regular basis for big sporting events and also about giving local people the chance to see such events without having to travel to Homebush or the city,’’ he said.

“We put money into our other facilities such as the arts centre and it’s about time we did the same with our sporting venues to bring big time sport to the area.’’

Cr Lake is asking that a report be prepared for a sports venue sponsorship policy and presented to council as soon as possible so it can be included in the 2017-2018 budget.

The policy should address how to build the region’s competitive advantage to host major events at Campbelltown Sports Stadium and how this would boost the reputation of the city and its’ economy, the motion says.

Cr Lake said this morning that such a strategy would mean much more than just ensuring that the stadium was not a white elephant.

“Obviously it would be great for local fans not to have to travel far for major sporting events,’’ Cr Lake said.

“But these events will bring people into Campbelltown and Macarthur and boost the local economy,’’ he said.

“If you don’t spend money you won’t make money.’’

Cr Lake said the sponsorship money would come from council reserves – from things like sale of council land and other sources.

“We have a great facility close to public transport and if we can end up having a big sporting event there at least once a month, well, what’s wrong with that.’’

More than 40 years experience in the news media, most of them as editor of local newspapers across the Sydney metro area, but a few years working as a sub-editor with the metros. Lots of awards, both as a reporter and editor, but says he values just as much Community Service Awards from Campbelltown City Council in 2004 and 2016. Took a voluntary redundancy in 2014 from Fairfax Community Newspapers after 21 years there. Loves the digital world, because ''there's no question it's the future''. Eric promises his hard hitting but fair approach won't change when he reports the news via cyber space.
View all posts by Eric Kontos
Elijah extends Wests Tigers contract and coach Taylor couldn’t be happier
Mayor’s Christmas appeal helps to take pressure off families doing it tough