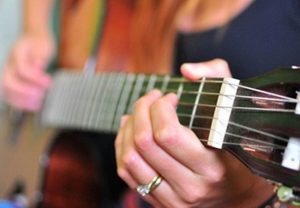 The music program in the palliative care ward at Liverpool has been so successful it will now be introduced at Camden Hospital.

The calming and healing benefits of the sound of music uncovered at Liverpool Hospital’s palliative care ward will now spread to Camden thanks to Western Sydney University.

Liverpool Hospital’s palliative care ward developed a program that sees volunteers, including music students, hospital staff members or patient relatives, coming in to do regular performances for the patients.

The district’s palliative care volunteer coordinator, Arlene Roache, said the collaboration was an exciting extension of the existing music program, which won a prestigious district quality award this year.

“The feedback from patients and their families about the music performances has been so positive and staff can really see the difference it makes,” she said.

“Music is now embedded in the culture of the ward and it forms an essential part of the holistic care offered in the palliative care ward.”

Since 2014 when the program began, performers have donated 120 hours of music to the ward and the program will now be available at Camden Hospital’s  palliative care unit as well. 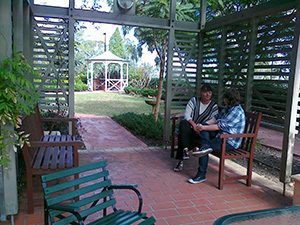 The South Western Sydney Local Health District’s palliative care volunteer service is collaborating with the university’s Master of Creative Music Therapy course to bring students into the wards to play for the patients.

The weekly volunteer performances will form part of the students’ development each semester as they train to becoming music therapists.

“The key to music therapy is engagement and our students are trained to understand individual needs, engage in musical interaction, and relate well to other professionals,” Dr Short said.

“Music is often the key to helping people who are withdrawn, depressed, anxious or in pain, and music therapy is often acceptable when individuals are reluctant to talk to other professionals.

“We are so pleased to be involved in this excellent program.”

Ms Roache said it was pleasing to see patients in Camden Hospital’s palliative care unit will now be able to benefit from the music program.

“A large hospital can feel very intimidating and un-home like for patients and families navigating the final weeks of life,” she said.

“Music can provide an emotional release and it can also help patients and their families share their emotions and reflections.’’