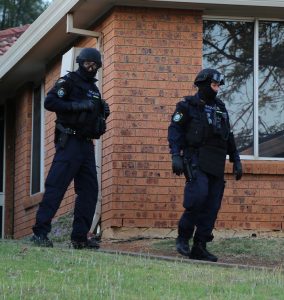 Members of Operation Treweeke III during this morning’s execution of warrants which led to seven arrests.

Seven people have been arrested after a series of search warrants targeting drug supply in the south west Sydney and Macarthur regions were executed this morning.

Police from Camden Local Area Command formed Operation Treweeke III to target the supply of MDMA in the region.

During the search warrants police seized more than 680 grams of MDMA, numerous vials of steroids, small amounts of cocaine, almost a kilogram of cannabis.

They also seized more than $10,000 in cash, eight pairs of knuckle dusters, and numerous mobile phones.

More than 40 years experience in the news media, most of them as editor of local newspapers across the Sydney metro area, but a few years working as a sub-editor with the metros. Lots of awards, both as a reporter and editor, but says he values just as much Community Service Awards from Campbelltown City Council in 2004 and 2016. Took a voluntary redundancy in 2014 from Fairfax Community Newspapers after 21 years there. Loves the digital world, because ''there's no question it's the future''. Eric promises his hard hitting but fair approach won't change when he reports the news via cyber space.
View all posts by Eric Kontos
Problem solved! Curran Public School team wins again
Badgerys airport business case reveals $11 billion boost