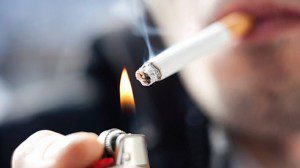 There’s big fines for retailers who sell cigarettes to minors

“We are sending a loud and clear message to tobacco retailers, particularly those selling to children and taking advantage of the availability of cheap illegally imported cigarettes,” Dr Conaty said.

“The illegal cigarettes don’t comply with plain packaging laws, meaning people, especially children, are not warned about the dangers of smoking.

“Illicit tobacco is sold considerably cheaper than regulated tobacco so the most disadvantaged communities, who have already high smoking rates, are particularly vulnerable.

“Evidence shows that price is a major influence in encouraging people to quit and preventing young people from taking up smoking.

Much effort has gone into educating and reminding retailers of the penalties of selling tobacco products to children and it is worrying that young people are still able to buy cigarettes from some irresponsible shops.

“While some retailers might think selling cheap tobacco products is good for business it’s not good for young people and the penalties are high.”

Under the Public Health (Tobacco) Act 2008, it is a criminal offence to sell cigarettes to people under the age of 18.

More than 40 years experience in the news media, most of them as editor of local newspapers across the Sydney metro area, but a few years working as a sub-editor with the metros. Lots of awards, both as a reporter and editor, but says he values just as much Community Service Awards from Campbelltown City Council in 2004 and 2016. Took a voluntary redundancy in 2014 from Fairfax Community Newspapers after 21 years there. Loves the digital world, because ''there's no question it's the future''. Eric promises his hard hitting but fair approach won't change when he reports the news via cyber space.
View all posts by Eric Kontos
Food safety guide rolled out
Apollo-M the next step in music evolution