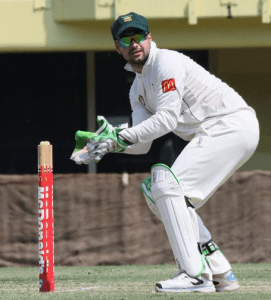 The Ghosts wicket keeper and opening bat Nick Carruthers found some form on the weekend, scoring heavily, both in the T20 and in grade.

Campbelltown Camden Ghosts first grade head into cricket’s version of the rivalry round this weekend still looking for their first win of the 2016-17 season.

The Ghosts will host neighbouring Fairfield Liverpool Lions to play for the the Arthur Watson Trophy.

But after another loss on the weekend, only victory will do for the Ghosts.

The clash with the Lions will see the use of Raby 1 for the first time this season after delays caused by the weather during winter.

Raby 1 is spinner friendly so the Ghosts will be looking at their star import, Monty Panesar, to guide them to victory over the Lions.

The Ghosts tasted victory in the first round of the Kingsgrove Sports T/20 Cup on Sunday.

Winning the toss in the away match against Central Coast, Ghosts skipper Scott Coyte elected to bat.

Continuing with his form from the Saturday match against University of NSW at Raby 2, Carruthers smashed 81 runs from 56 balls, which included seven fours and three sixes.

His innings also set up a platform for Jaydyn Simmons who went on to score 58 runs, while the team finished with 188 after its allotted 20 overs.

Panesar, like the rest of the Ghosts bowlers was economical taking 1/22 off 4 overs while Webb’s figures of 3/33 were well deserved.

However, Jack Preddy was the pick of the Ghosts bowlers if you had to pick one.

The young leg spinner bowled at a crucial time to contain the Central Coast bats and finish with 1/21 from four overs.

Jaydyn Simmons completed a good all round match, bowling three overs for 1/17 as the home side fell more than 60 runs short of the target.

A day earlier, the Ghosts first grade, at home at Raby, scratched their way to 186 after a valuable 31 runs was added for the last wicket.

Jordan Browne, who was unable to bowl in the afternoon due to illness, delighted all at Raby with some entertaining batting on his way to a quick 30 runs.

On day one a week earlier Nick Carruthers (31 runs) and Jack Preddy (46 runs) had been the main contributors.

On a dry, flat, day two Raby wicket the Ghosts were always going to find it tough to defend their 186 runs. A century to University of NSW’s, James Henry, made sure of that as his UNSW team cruised past the Ghosts total.

To their credit, the Ghosts bowlers toiled hard and 20 minutes before tea UNSW declared at 6/301 – a par score for Raby #2 ground this season.

Leg spinner Jack Preddy (3/80) and Luke Webb (2/33) were the most successful Ghosts bowlers.

The Ghosts batsmen returned for the second innings and at least found some form.

The Ghosts wicket keeper and opening bat Nick Caruthers was ruthless, scoring a quick 49 runs that included four sixes and 4  boundaries from 31 balls.