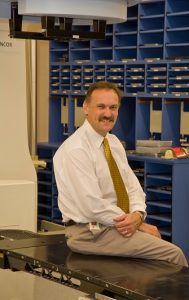 We can, I can: Professor Geoff Delaney, the cancer services director of South Western Sydney Local Health District says there are simple ways to reduce the risk of cancer.

A local cancer expert says a third of cancers can be attributed to lifestyle factors like smoking, sun exposure, alcohol, diet and a lack of physical activity.

Speaking on the eve of World Cancer Day this Sunday, February 4, Professor Geoff Delaney, the cancer services director of South Western Sydney Local Health District said this was an ideal time to take note of ways in which we can reduce the incidence and impact of cancer.

We Can, I Can is the theme for this year’s World Cancer Day.

Figures from the Cancer Institute of NSW show about 4,855 people were diagnosed with some form of cancer in the local health district in 2016 and 1675 people died from the disease.

Data from the institute shows prostate cancer is the most prevalent cancer in south western Sydney, followed by breast, lung and colon cancers.

Melanoma was the fifth most common cancer type in the region.

Prof Delaney said it was also important for people to ensure they have regular cancer screening.

“Screening programs for cancers like cervical, breast and bowel cancer can detect the disease when it is in the early stages, giving people the best chance of recovery,” he said.

“NSW offers a variety of free screening programs, such as BreastScreen, and we encourage people to take advantage of them.”

Professor Delaney said the other important aspect of the local health district’s cancer services department was the commitment to research to improve the outcomes for cancer patients.

“We encourage South West Sydney residents to contribute to our research through donations,” he said.

“By continuing to fund this vital research, we can make sure discoveries and advancements are translated into new treatments as soon as possible.”

For more information on treatment and care visit www.swslhd.health.nsw.gov.au/cancer