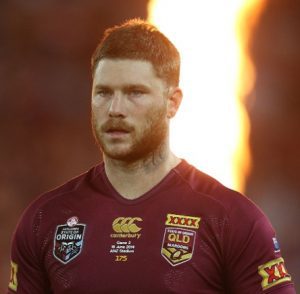 Queenslander: Chris McQueen will be a Tigers from 2018 after agreeing to a three year deal.

After a horror start to the season, the Wests Tigers have enjoyed almost a whole week of positive news.

Following their excellent performance and win over the Cowboys in Townsville last Saturday, skipper Aaron Woods has announced he will determine his future in the next couple of weeks.

All Wests Tigers fans will have fingers crossed “Woodsy’’ signs on for a couple more years at Leichhardt and Campbelltown.

In the meantime though, Wests Tigers have announced that they have snared the signature of another State of Origin player, Queenslander Chris McQueen.

The 30 year old forward, who will be joining the club for the 2018 NRL season, has signed a three year deal that will see him at the Tigers until the end of the 2020 season.

“I’m really looking forward to having Chris on board for the next three seasons,” Cleary said.

“Not only does he bring plenty of experience with him, he is also an extremely consistent player.

“It’s clear that Chris has greatly helped the Titans’ young players develop on and off the field in the past few years, and that will no doubt be a strong asset at this club too.

“Knowing how hard Chris works and how team-focussed he is, I’m sure it won’t take long for Wests Tigers members and fans to really appreciate him and regard him as a fan-favourite,’’ Cleary said.

“Chris is a player of high calibre and will no doubt be a strong asset to our club,” Pascoe said.

“Not only is he an experienced representative player, he is also a great person off the field and possesses the attributes that we value highly at this club.

“I’m sure that Wests Tigers members and fans will be excited by the addition of Chris to our team from 2018 onwards.

“It’s a really positive sign for Wests Tigers and our roster moving forward.’’

McQueen has played 145 games since making his debut eight years ago for the Rabbitohs, where he won a premiership in 2014.

He has been with the Gold Coast Titans for the past two seasons.

McQueen has played six State of Origin games for Queensland and was a part of the Prime Minister’s XIII teams in 2011 and 2015, as well as the 2017 All Stars match earlier this year.

• Wests Tigers are taking on the Parramatta Eels in round seven of the NRL premiership on Easter Monday at ANZ Stadium.