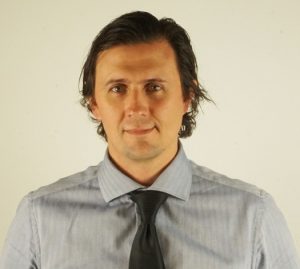 The most important thing about embracing technology is understanding it, says James Wright, a bio-medical engineer with the MARCS Institute for Brain, Behaviour and Development at Western Sydney University.

Here’s some food for thought as you get ready to enjoy the Easter break: machines are watching us, they are listening to us, living with us and soon they will be living inside us.

As the world comes to grips with an ever growing technological society, a question that is often asked is: Can and should we trust machines?

Headlined by WSU researchers, the Food 4 Thought Seminar series brings the most controversial topics of today into a space where they can be broken down, analysed and discussed before a large public audience.

James Wright, a bio-medical engineer with the MARCS Institute for Brain, Behaviour and Development, believes that a symbiotic relationship between man and machine is necessary if society is continue to progress.

“The most important thing about embracing technology is about understanding it,” he said.

“As a society, we already trust machines. If we didn’t, then we wouldn’t rely so heavily on our smart devices to correct our spelling, give us directions, manage our finances or tell us the weather.

“Australia is now in the midst of an ageing population crisis that continues to grow. There are approximately 3.5 million people in Australia over 65 and more than half of this group is reported to be living with a disability that restricts the performance of their everyday activities.

“What we are likely to see is greater dependence on technological aids to restore movement and independence in our older residents.

“We need to be prepared to allow the machines to do their job.”

Mr Wright is currently developing an interface for a prosthetic limb, or “exoskeletal arm” to improve the lives of stroke victims, amputees and those who are paralysed.

“I am trying to work out just how to plug an exoskeleton into a human being using a method that allows direct communication between the prosthetic limb and the nervous system in order to control movement and sensation,” he said.

“In theory, this interface will connect an intelligent, semi-autonomous system into the nerves inside a person’s arm. For this to be effective, this system will also need to understand patterns of behaviour and make informed decisions about the welfare of its user.

“In order for us to be successful in giving movement back to those who are paralysed, our technology needs to be smart enough to learn about us, and as humans, we need to have sufficient faith in machines to allow them to do just that.”

More than 40 years experience in the news media, most of them as editor of local newspapers across the Sydney metro area, but a few years working as a sub-editor with the metros. Lots of awards, both as a reporter and editor, but says he values just as much Community Service Awards from Campbelltown City Council in 2004 and 2016. Took a voluntary redundancy in 2014 from Fairfax Community Newspapers after 21 years there. Loves the digital world, because ''there's no question it's the future''. Eric promises his hard hitting but fair approach won't change when he reports the news via cyber space.
View all posts by Eric Kontos
Campbelltown scoops the pool in local government excellence awards
More positive news as Wests Tigers sign Chris McQueen for three years