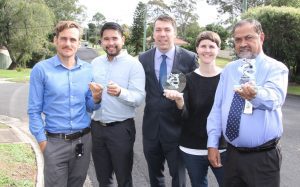 Campbelltown City Council has made a big splash at the 2017 Local Government Excellence Awards.

It took out top honours in three award categories, the most by any participating council.

Campbelltown Council was named number one in the following award categories:

Excellence in asset management and infrastructure initiatives – for the implementation of microsurfacing treatment, part of council’s pavement management strategy.

Excellence in creative communities – for Campbelltown Arts Centre’s With Secrecy and Despatch exhibition.

But that’s wasn’t the end of an excellent result for Campbelltown in the 2017 awards.

Council’s annual free recyclables drop-off day was also recognised as a finalist in the Excellence in environmental leadership and sustainability (population over 100,000) award category.

Mayor of Campbelltown, Cr George Brticevic, congratulated staff on their success, saying the awards demonstrated council’s dedication to providing a high standard of service to the local community.

“Recognition of these projects also highlights the scope of services council provides to our community, and our commitment to being leaders in our industry – whether it’s through looking for new ways to improve our roads, confronting painful subjects through art, or inspiring our young people to develop practical ways to care for our environment,” he said.

“I’m very proud council, and its staff, have received this recognition for these outstanding projects.”

The awards are hosted by Local Government Professionals Australia, NSW.

They recognise and showcase excellence in the local government sector.

This year’s LG Awards Dinner attracted more than 300 people when it was held last week at the Ivy Ballroom in Sydney.

Visit council’s website here to find out more about its services and facilities. 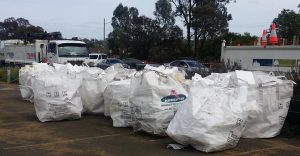 Recycling was another winner for Campbelltown at the 2017 Excellence Awards.

Council’s sustainable schools program was a winner for Campbelltown.

More than 40 years experience in the news media, most of them as editor of local newspapers across the Sydney metro area, but a few years working as a sub-editor with the metros. Lots of awards, both as a reporter and editor, but says he values just as much Community Service Awards from Campbelltown City Council in 2004 and 2016. Took a voluntary redundancy in 2014 from Fairfax Community Newspapers after 21 years there. Loves the digital world, because ''there's no question it's the future''. Eric promises his hard hitting but fair approach won't change when he reports the news via cyber space.
View all posts by Eric Kontos
Bigger, better Megacenta has new name: The Grove Homemaker Centre
Can we trust machines is something worth thinking about