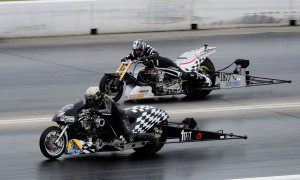 Porter faced an epic rebuild when his Nitro Harley exploded at the Fuchs Winternationals in June damaging the cylinder heads, wiring, air lines and the crank.

It has been a frustrating few months on the sidelines for Porter who by his own admission did not adjust well to life without racing. But he is back and ready to make an assault on the Australian Nationals crown and get a jump on season 2015.

“The rebuild was a complete strip down to bare frame, new motor, wiring, air lines,” he said. “It pretty well melted everything.”

“I still haven’t got the bike back yet. It’s in Queensland being wired up so I hope to have it back in time for testing at Sydney Dragway.

“I’d like to thank my crew Mitch and Geoff, Craig and the crew from Duncan Foster, Fraser Motorcycles, Mark Drew, Chris Matheson, NRE Qld, and Haggis from S&K Elec.”

Looking ahead to 2015, Porter is excited by the prospect of a WWE style triple threat match between himself, new number #1 Mark Drew and three time champ Chris Matheson.

They each hold the utmost respect for each other and it promises to be a tight battle in the abbreviated six-month season.

“Mark with his new USA rocket ship and Matho bringing out the ex-Vance n’ Hines Nitro Harley of Doug Vancil, it should be some good low six second side by side passes.”

“Mark and I are in the same club so we’re happy either one of us have the number #1 and he spent the last year in the USA and WA finding the best bike, and he did.

“It’s Doug Horne’s USA #1 Harley Davidson for the last three years. I’ve seen the darter and the last 10 passes were all 6.20 something. Right place, right time.”

Don’t miss the action as titles will be decided and champions will be crowned when the season deciding Australian Nationals take over Sydney Dragway October 31 – November 2.

More than 40 years experience in the news media, most of them as editor of local newspapers across the Sydney metro area, but a few years working as a sub-editor with the metros. Lots of awards, both as a reporter and editor, but says he values just as much Community Service Awards from Campbelltown City Council in 2004 and 2016. Took a voluntary redundancy in 2014 from Fairfax Community Newspapers after 21 years there. Loves the digital world, because ''there's no question it's the future''. Eric promises his hard hitting but fair approach won't change when he reports the news via cyber space.
View all posts by Eric Kontos
Big soccer, athletics events on the way
Primary school kids to check out our brilliant wildlife