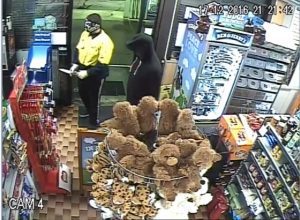 A CCTV image taken during the robbery at St Andrews just before Christmas last year.

Local police are appealing for public assistance to track down two men involved in an armed robbery in St Andrews.

Police have been told they threatened staff, before fleeing towards Saggart Reserve, St Andrews.

Following inquiries, detectives attached to Macquarie Fields Local Area Command have released images of two males who may be able to assist their investigation.

The first male is described as being of medium to large build, with short dark hair, and holding a knife.

The second male is described as being of medium build, and was last seen wearing a black hooded jumper, black tracksuit pants with two white stripes down both legs, black joggers and light full finger gardening gloves.

The two men are believed to frequent the Fairfield area.

Anyone with information, or who can identify the males pictured, is urged to contact Crime Stoppers on 1800 333 000 or use the Crime Stoppers online reporting page: https://nsw.crimestoppers.com.au/

More than 40 years experience in the news media, most of them as editor of local newspapers across the Sydney metro area, but a few years working as a sub-editor with the metros. Lots of awards, both as a reporter and editor, but says he values just as much Community Service Awards from Campbelltown City Council in 2004 and 2016. Took a voluntary redundancy in 2014 from Fairfax Community Newspapers after 21 years there. Loves the digital world, because ''there's no question it's the future''. Eric promises his hard hitting but fair approach won't change when he reports the news via cyber space.
View all posts by Eric Kontos
Wests Tigers: Brooks back, Idris out for battle against Bulldogs
Historic church saved for now – but legal challenge could be next