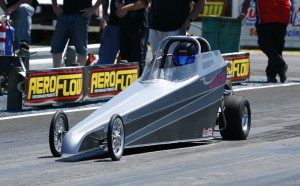 First time winner: Natalie Bishop, of Orangeville, after her breakthrough junior dragster final win in round 7 of the ANDRA nationals at South Coast. Picture by Dave Hope

Among the first time winners in round 7 of the ANDRA racing season on the weekend was Natalie Bishop, of Orangeville.

Bishop, who was runner up to her brother in Mildura last month, won her first National event with victory over Jake Berias in the Summit Racing Equipment Junior Dragster final.

Another Macarthur local, Camden’s Jason Stares was defeated by another first time winner, Paul Russo, who took the honours in Top Sportsman.

Stares was shooting for his third final title in a row but Russo had other ideas.

“It’s taken a year and a half to get there but we finally got there, we’re stoked,” Russo said.

“We raced Jason Stares a couple of weeks ago and lost so it’s good to finally get one back on him, thanks Jase.’’

More than 40 years experience in the news media, most of them as editor of local newspapers across the Sydney metro area, but a few years working as a sub-editor with the metros. Lots of awards, both as a reporter and editor, but says he values just as much Community Service Awards from Campbelltown City Council in 2004 and 2016. Took a voluntary redundancy in 2014 from Fairfax Community Newspapers after 21 years there. Loves the digital world, because ''there's no question it's the future''. Eric promises his hard hitting but fair approach won't change when he reports the news via cyber space.
View all posts by Eric Kontos
Let’s fix some things before giving summer the flick
Wests Tigers: finally in the news for something positive