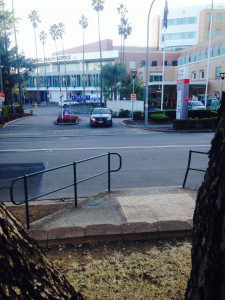 The entrance to the Liverpool Hospital emergency department

Detectives investigating a fatal stabbing in Liverpool overnight have now established a crime scene at a home in Ashcroft.

About 9.30pm (September 29), two men attended Liverpool Hospital with multiple stab wounds. One of the men, a 24-year-old from Macquarie Fields, died shortly after arriving. The other man, a 27-year-old from Ingleburn, remains in hospital in a serious condition.

A short time later, a 30-year-old Mt Pritchard man was driven to the hospital with stab wounds to his hands and injuries to the back of his head. Detectives from Liverpool Local Area Command attended the hospital and launched an investigation.

Investigators seized two vehicles near Liverpool Hospital which are being forensically examined.

Following inquiries, detectives executed a warrant at a home on Sadleir Avenue at Ashcroft about 11.15am today (Tuesday).

A crime scene was established at the home after evidence was found suggesting a confrontation had taken place at the home last night. Police are awaiting the results of forensic examination to confirm if the crime scene is linked to the stabbing death of the man.

A small section of Sadleir Avenue remains closed and diversions are in place. Strike Force Emmer has been established by officers from Green Valley Local Area Command to investigate the incident. Local detectives are being assisted by officers from the State Crime Command’s Homicide Squad.