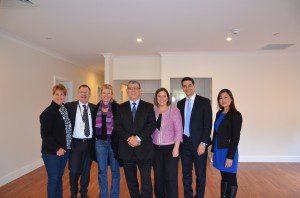 Brilliant design: Minister John Ajaka, centre, inspects the home in Liverpool with the member for Menai Melanie Gibbons and the mayor of Liverpool Ned Mannoun to his left.

THE NSW Minister for Disability Services, John Ajaka and the Member for Menai Melanie Gibbons today visited a new group home in Liverpool, which is scheduled to open next month as part of replacing Metro Residences in Westmead and Rydalmere for people with disabilities.

In 2014/15 the NSW Government will spend more than $43 million to redevelop Metro Residences as part of the biggest decentralisation attempted in Australia.

“In the coming months more than 90 people will move from outdated facilities and into purpose-built new homes integrated into local neighbourhoods,” Mr Ajaka said.

“Families and clients have chosen where their new homes are built and were closely involved in the design process during construction.

“The brilliantly designed homes will place residents closer to their families and provide opportunities for increased participation in their local communities.”

Ms Gibbons said the properties will be protected with fire sprinkler systems and will provide every resident with their own bedroom, an accessible kitchen, two large living rooms and a landscaped backyard.

“Five residents will soon call this place their new home. It will be staffed by nurses so that residents can access the care they require.

“Providing the opportunity to exercise choice and control by residents and their families were the hallmark of this major project.”

More than 300 people from the Westmead and Rydalmere Centres will be living in 64 brand new houses to be located in Sydney, the Central Coast and Wollongong by the end of 2015.

More than 40 years experience in the news media, most of them as editor of local newspapers across the Sydney metro area, but a few years working as a sub-editor with the metros. Lots of awards, both as a reporter and editor, but says he values just as much Community Service Awards from Campbelltown City Council in 2004 and 2016. Took a voluntary redundancy in 2014 from Fairfax Community Newspapers after 21 years there. Loves the digital world, because ''there's no question it's the future''. Eric promises his hard hitting but fair approach won't change when he reports the news via cyber space.
View all posts by Eric Kontos
Women’s grand final to be streamed live
Let’s make Liverpool great