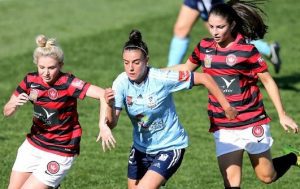 The Wanderers’ women’s league team will have a new coach in the new season, Norm Boardman.

Having worked with the squad as assistant coach in the 2013/14 season, Boardman’s familiarity of the club and players will merge well with his wealth of experience from his previous roles such as Football NSW Technical Director and Football Federation Australia National Community Coach Education Manager.

Wanderers CEO John Tsatsimas said the appointment of Boardman is testament to Wanderers commitment to women’s football and the Westfield W-League.

“To have a coach of the calibre of Norm Boardman in charge of our Westfield W-League squad will bring a new level of performance and development to our team – one that sits within our overarching culture and philosophy,” said Tsatsimas.

“As well as increasing the standard on the pitch, Boardman’s experience and knowledge gained from some of the highest levels in football will nurture the next generation of young female players in Western Sydney.

“This is an exciting appointment and we’re highly anticipating the start of the upcoming Westfield W-League season.”

Boardman said he was excited to take the reins and looked forward to his first match in charge of the Red and Black.

“With such a rich footballing history in Western Sydney we have a unique opportunity at the Wanderers to build what could be Australia’s biggest stronghold for women’s football,” he said.

“I’m proud to be given the chance to continue to build on the club culture here at the Wanderers that will not only produce success on the field but will establish a pathway to ensure women’s football in Western Sydney grows stronger and stronger for years to come.

“We aim to play a successful and entertaining brand that will make us highly competitive while at the same time inspiring girls throughout our region to take up football.

The Western Sydney Wanderers are in the process of finalising their squad for the Westfield W-League 2014/15 season.

More than 40 years experience in the news media, most of them as editor of local newspapers across the Sydney metro area, but a few years working as a sub-editor with the metros. Lots of awards, both as a reporter and editor, but says he values just as much Community Service Awards from Campbelltown City Council in 2004 and 2016. Took a voluntary redundancy in 2014 from Fairfax Community Newspapers after 21 years there. Loves the digital world, because ''there's no question it's the future''. Eric promises his hard hitting but fair approach won't change when he reports the news via cyber space.
View all posts by Eric Kontos
Liverpool youth services win boost
Boys in blue to also rise for Alex McKinnon