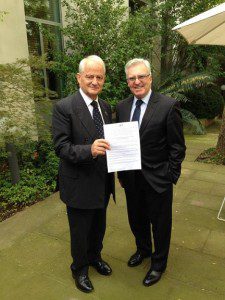 The co-chairmen of the Australian Parliamentarians against the Death Penalty group, Fowler MP Chris Hayes and Philip Ruddock have received advice that the President of the Senate and the Speaker of the House of Representatives have formally approved the reforming of the group for the 44th Parliament.

The impending execution of the two Bali Nine Australians on death row in Indonesia has put the issue of the death penalty at the front of mind for many Australians. The re-forming of this group is in response to a number of politicians who feel Australia has a role to play in ending the death penalty internationally.

“I have fought against the death penalty, as a matter of principle, for the entirety of my Parliamentary career,’’ Mr Ruddock said.

“This is still something I feel passionately about and will continue to raise among colleagues at home and abroad. Australia must take a firm stance against this barbaric practice.’’

“I oppose the death penalty wherever it occurs. To me, capital punishment is the most cruel and inhuman response to crime. It represents a violation of the most basic of all human rights; and that is life itself.

“My opposition to capital punishment, including advocacy for its abolition, is universal and not only when it involves Australians,” Mr. Hayes said.

So far 36 Federal Parliamentarians from across the Parliament have sought membership of this group.

The group will be meeting with legal experts, foreign dignitaries, foreign parliamentarians and human rights groups to discuss the role Australia can play in advocating against the death penalty.

More than 40 years experience in the news media, most of them as editor of local newspapers across the Sydney metro area, but a few years working as a sub-editor with the metros. Lots of awards, both as a reporter and editor, but says he values just as much Community Service Awards from Campbelltown City Council in 2004 and 2016. Took a voluntary redundancy in 2014 from Fairfax Community Newspapers after 21 years there. Loves the digital world, because ''there's no question it's the future''. Eric promises his hard hitting but fair approach won't change when he reports the news via cyber space.
View all posts by Eric Kontos
Upgrades to schools, waterways and cycling tracks promised
Charity race night: Mayor Lake calls for legacy of support