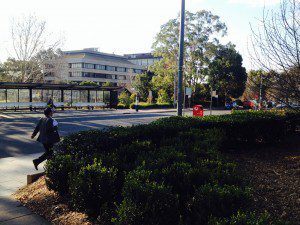 Pay your rates, have a cup of coffee: the Campbelltown City Council civic centre in Queen Street.

Visitors to Campbelltown library will soon be able to enjoy a cup of coffee to accompany their reading.

Council has backed plans for a coffee shop at the HJ Daley Library, and also the civic centre in Queen Street.

A report to council for the July 29 meeting noted that a number of other councils, including Liverpool, had allowed privately run coffee shops to operate within council facilities such as libraries.

reception area or courtyard of the civic centre building.

More than 40 years experience in the news media, most of them as editor of local newspapers across the Sydney metro area, but a few years working as a sub-editor with the metros. Lots of awards, both as a reporter and editor, but says he values just as much Community Service Awards from Campbelltown City Council in 2004 and 2016. Took a voluntary redundancy in 2014 from Fairfax Community Newspapers after 21 years there. Loves the digital world, because ''there's no question it's the future''. Eric promises his hard hitting but fair approach won't change when he reports the news via cyber space.
View all posts by Eric Kontos
ConnectFX a new way for businesses to inspire each other
Japanese flavour to Riverfest ’14