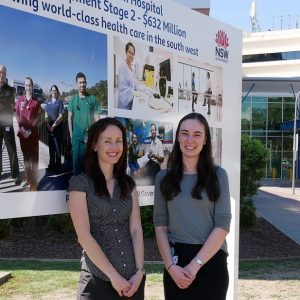 As the scholarship recipients, second year students Courtney Smith and Kaitlyn Hockey will contribute to the planning of the hospital’s $632 million stage two redevelopment.

Under the terms of the scholarship, they will attend regular planning meetings during the next four years, offering their perspective as students and future doctors.

“This is an exciting time for the local community and this includes our future leaders from the region who we welcome to be involved in the planning process,’’ Ms Derrett said.

Ms Smith will bring her background as a process engineer with mining industry experience to the redevelopment.

She also has a passion to practise medicine regionally and hopes to bring the skills learnt from her scholarship experience to regional facility planning in the future.

Ms Hockey, who has experience as a health volunteer, hopes to add a community health perspective to the project.

Western Sydney University will continue to be a valued and important stakeholder in the hospital and its redevelopment.

For further information contact the Campbelltown Hospital redevelopment team on 4634 2071 or email SWSLHD-CampbelltownHospitalRedevelopment@health.nsw.gov.au