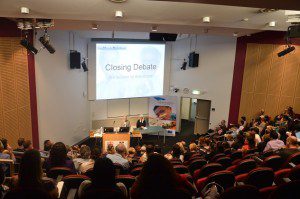 Debate time: Debate time: Professor Les Bokey presents for the “Surgeons’’ side at the inaugural closing debate, which saw teams battle it out with the theme Physicians versus Surgeons.

Nursing and midwifery research was the main theme of the ninth annual research and teaching showcase at Liverpool Hospital last week.

The showcase is a joint initiative of the Ingham Institute for Applied Medical Research and the South Western Sydney Local Health District’s (SWSLHD).

The 20124 event showcased the abundance of Australian-leading research in Sydney’s south west.

Nursing and midwifery research heavily influences current and future practices in terms of patient care and recovery, making it vital for the future of Australia’s health.

More than 130 oral and poster presentations demonstrated the progress achieved by the Ingham Institute and affiliated researchers in these important areas. 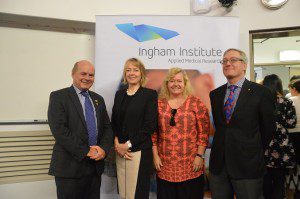 “Nurses and midwives are really at the frontline of health care and play a big role in improving illness and injury while also assisting the growth and development of Australia’s next generation,” professor Barton told the audience.
“The Ingham Institute’s nursing and midwifery research group, the Centre for Applied Nursing Research (CANR) conducts broad-reaching work to maximise patient safety with a special focus on women and children’s health.

“This includes areas like prevention, medication safety and risk management.

“The service was initially developed in Campbelltown and, due to its overwhelming success, is now being rolled out in Victoria and looks set to be adopted as a national healthcare standard,’’ he said.

There were also presentations from Hannah Dahlen, professor of midwifery, and deputy higher degree research director of UWS’ School of midwifery and nursing and professor Sandy Middleton, director of the Nursing Research Institute.

The cancer stream also had a special guest speaker from Toronto in Canada: professor Michael Milosevic, a radiation oncologist at the Princess Margaret Cancer Centre.

Professor Milosevic delivere a special presentation about his research, which focuses on the translational biology studies specifically in tumours relating to cervix or prostate cancer. 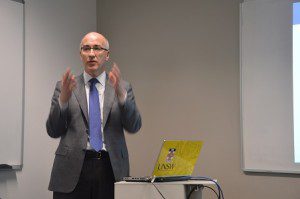 To keep the event fresh and encourage further interest from the research community, this year’s showcase program alo included a closing debate.

Some of the institute’s top researchers and clinicians, including the recent winner of the Lady Mary Fairfax distinguished researcher award announced at the recent Ingham Institute’s  annual awards night, professor Guy Marks, battle it out on the highly topical and competitive subject: physicians versus surgeons.

More than 40 years experience in the news media, most of them as editor of local newspapers across the Sydney metro area, but a few years working as a sub-editor with the metros. Lots of awards, both as a reporter and editor, but says he values just as much Community Service Awards from Campbelltown City Council in 2004 and 2016. Took a voluntary redundancy in 2014 from Fairfax Community Newspapers after 21 years there. Loves the digital world, because ''there's no question it's the future''. Eric promises his hard hitting but fair approach won't change when he reports the news via cyber space.
View all posts by Eric Kontos
Minor premiers West Sydney Pirates can party like it’s 1999
Wests Tigers re-sign rising star