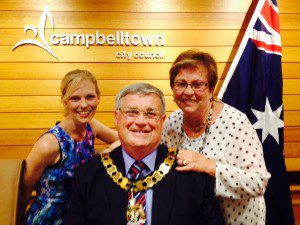 Family support: Paul Lake congratulated by his youngest daughter Karen and his wife Vicky just after being elected mayor.

The new mayor of Campbelltown, Paul Lake, has no doubt about the challenges facing the town.

Councillor Lake, who was elected mayor at an extraordinary council meeting which got under way at 7pm tonight, said the area faced many challenges.

“This is a privilege, to lead Campbelltown in this role, and I have been lucky to do it once already,’’ the mayor elect said on moving up from his normal seat to occupy the big chair next to council general manager Paul Tosi.

“This is really special for me because my wife and daughter are here tonight. My family have been very supportive over the past few years and I am grateful to them for that,’’Cr Lake said.

“While I haven’t got specific goals – I didn’t want to get ahead of myself before actually winning the ballot tonight – I know that Campbelltown has got to work very hard to achieve things like regional city status or getting the nod for a third major stadium in the Sydney metro area.’’

Veteran councillor Fred Borg was the only other name in the ring when the vote was taken via a show of hands.

Mr Tosi, who was returning officer, announced that Mr Lake had won the ballot after eight hands had gone up in his favour in the 15 seat chamber.

Elected as his deputy was Councillor Ted Rowell, who beat off the challenge from Councillor Darcy Lound by the same margin as Cr Lake. 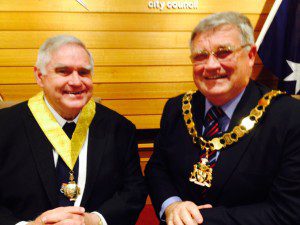 New team at the helm: deputy mayor Ted Rowell, left, with the Mayor, Paul Lake, just after being elected tonight.

The minister was given permission to address the council and he proceeded to congratulate both the mayor and his father, the deputy mayor, on their election for the next 12 months to Campbelltown’s highest political offices.

Councillor Lake, who was first elected to council in 2004, first served as mayor in 2010.

During the past 12 months and while serving as deputy mayor to Cr Clinton, Cr Lake  was also the chairman of council’s key City Works committee and is also a member of the Joint Regional Planning Panel (JRPP) and a member of a number of other council committees. He is also a director on the board of the Wests League Club at Leumeah.

More than 40 years experience in the news media, most of them as editor of local newspapers across the Sydney metro area, but a few years working as a sub-editor with the metros. Lots of awards, both as a reporter and editor, but says he values just as much Community Service Awards from Campbelltown City Council in 2004 and 2016. Took a voluntary redundancy in 2014 from Fairfax Community Newspapers after 21 years there. Loves the digital world, because ''there's no question it's the future''. Eric promises his hard hitting but fair approach won't change when he reports the news via cyber space.
View all posts by Eric Kontos
Group 6 honours its best of the season
Wi-fi move brings internet revolution to Liverpool CBD