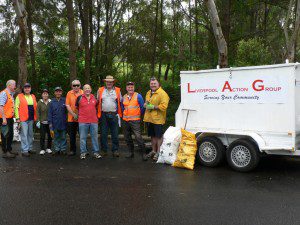 Community spirit: Members of Liverpool Action Group during Clean UP Australia days in 2013 and this year.

The mayor of Liverpool, Ned Mannoun, has defended Liverpool Action Group’s free use of space in the library for their monthly meetings.

Councillor Mannoun said LAG “does a wonderful job’’ for the community, cleaning up large public spaces every year during Clean Up Australia days and on other occasions

“We should be thanking them for what they do for Liverpool and encourage them to continue to do good works,’’ the mayor said at council’s last meeting in response to an attempt to ask the LAG to pay for the use of space in the city library in George Street.

The Labor Party’s Councillor Anne Stanley had sought support for her motion, which not only meant refusing the application for an extension of three years for free use of library space, but also called for a report on why the LAG “haven’t been paying’’.

But Cr Stanley and Councillor Geoff Shelton were the only two Labor Party councillors in attendance, and Cr Stanley’s motion was easily defeated.

Which meant that the council went ahead and approved a three year licence for the LAG to use the City Library Gold Room for their monthly meetings, with normal fees to be waived during this period. 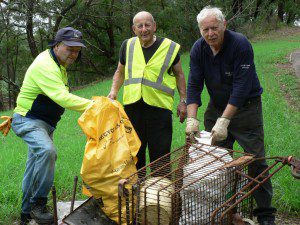 The LAG’s Ian Bailey was amused at the fuss his group had caused in the council meeting.

“All I can say is that Council must think it is well and truly up to date with rates, roads and rubbish to table such trivia.

“[former council general manager]Phil Tolhurst first gave us freedom of a room at the library (for four hours a month) and with changes at the top this year it has taken umpteen emails, seven pages of applications and now a Council vote,’’ Mr Bailey said.

More than 40 years experience in the news media, most of them as editor of local newspapers across the Sydney metro area, but a few years working as a sub-editor with the metros. Lots of awards, both as a reporter and editor, but says he values just as much Community Service Awards from Campbelltown City Council in 2004 and 2016. Took a voluntary redundancy in 2014 from Fairfax Community Newspapers after 21 years there. Loves the digital world, because ''there's no question it's the future''. Eric promises his hard hitting but fair approach won't change when he reports the news via cyber space.
View all posts by Eric Kontos
Penultimate weekend is do or die affair
Women’s grand final to be streamed live